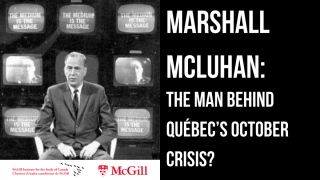 Join MISC for a lecture from Jonathan Slater about the legacy of Marshall McLuhan and his effects on the October Crisis.

Marshall McLuhan is renowned for his contributions to communication theory and his precepts about the effects of technology upon culture and society. In the 1960s and 1970s—the height of McLuhan’s career as Canada’s preeminent media guru—he worked largely within the confines of the University of Toronto, far away from the social and political unrest fermenting in Québec during those years.

Yet, from McLuhan’s writings and public pronouncements at that time and toward the end of his life, it’s clear that he was not insensitive to the plight of Québec francophones. Two of McLuhan’s contemporaries, his Toronto colleague Northrop Frye and Montreal author Hugh MacLennan, accused McLuhan of stirring up trouble in Québec. McLuhan’s open friendship with Prime Minister Pierre Trudeau ostensibly was behind Frye’s assertion that McLuhan was interfering in Québec’s affairs. MacLennan believed McLuhan’s contentions about mediated environments were abetting French nationalist sentiment in the province.

Jonathan Slater is director of the Institute for Ethics in Public Life at SUNY Plattsburgh, where he chairs the Department of Journalism and Public Relations and directs the Jewish Studies program. Slater also is a faculty associate of the college’s Center for the Study of Canada. He currently is researching and writing a book about mass media’s role in the tumultuous years between Québec’s Quiet Revolution and the October Crisis. Slater completed his doctorate in media ecology at New York University.

The webinar will be followed by a Q&A.

This webinar is free to attend. Registration is required..