The Challenges of Coexistence: Debating Language Policy in Canada 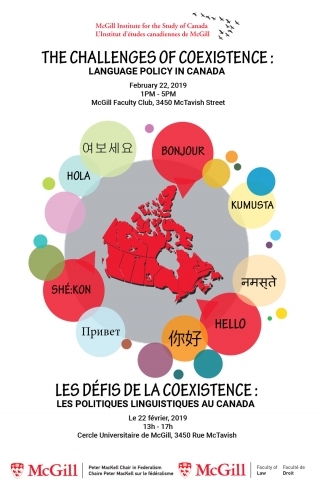 The Challenges of Coexistence: Debating Language Policy in Canada

Much has been written recently about language policy in Canada, in light of political developments in provinces like New Brunswick and Ontario, the 50th Anniversary of the Official Languages Act and the announced recognition of Indigenous languages in Canada. The objective of this Symposium is to discuss language policy in Canada, with a particular emphasis on language minorities. The event focuses on Canada’s two official languages and their fate at the federal and provincial levels while also bringing to the fore issues related to other languages present in Canada, including Indigenous languages.

Following a short introduction, a first panel will provide retrospective insights on official (and non-official or not-yet-official) languages in Canada (i.e. a sort of “lay of the land” from the perspective of various language groups). A second panel, will then look forward, take a more prospective approach. It aims at facilitating a conversation about the co-existence of Canada’s Official Languages with the recognition of Indigenous languages, and arguably of the country’s rich linguistic diversity. This event will be completely bilingual and will include simultaneous interpretation.

If you missed your chance to register for this event, you can watch the live stream here.