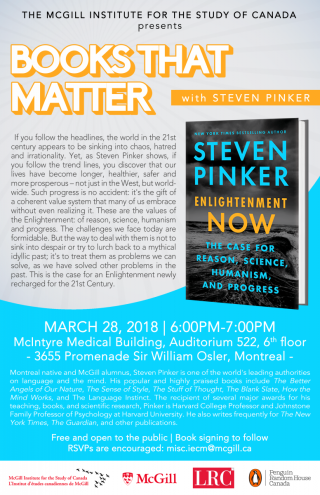 If you follow the headlines, the world in the 21st century appears to be sinking into chaos, hatred and irrationality. Yet, as Steven Pinker shows, if you follow the trend lines, you discover that our lives have become longer, healthier, safer and more prosperous – not just in the West, but worldwide. Such progress is no accident: it's the gift of a coherent value system that many of us embrace without even realizing it. These are the values of the Enlightenment: of reason, science, humanism and progress. The challenges we face today are formidable. But the way to deal with them is not to sink into despair or try to lurch back to a mythical idyllic past; it's to treat them as problems we can solve, as we have solved other problems in the past. This is the case for an Enlightenment newly recharged for the 21st Century.

Montreal native and McGill alumnus, Steven Pinker is one of the world's leading authorities on language and the mind. His popular and highly praised books include The Better Angels of Our Nature, The Sense of Style, The Stuff of Thought, The Blank Slate, How the Mind Works, and The Language Instinct. The recipient of several major awards for his teaching, books, and scientific research, Pinker is Harvard College Professor and Johnstone Family Professor of Psychology at Harvard University. He also writes frequently for The New York Times, the Guardian and other publications.

Free and open to the public | Book signing to follow

Please note that both the guest list and waiting list is full. In an effort to respond to the amazing amount of interest this event has generated, we have made arrangements for a livestreaming service to broadcast the talk through our Facebook page. The link will be made available via our social media channels once the event begins.