Book Talk with Jatinder Mann: The Search for a New National Identity 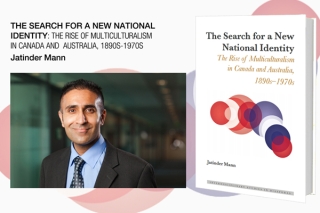 Jatinder Mann is a Visiting Senior Research Fellow at King’s College London and a former Banting Postdoctoral Fellow at the University of Alberta. He is working on a project on ‘The end of the British World and the redefinition of citizenship in Australia, Canada, and New Zealand, 1950s-1970s’.

In addition to his most recent book, Jatinder has published numerous articles in front-ranking, interdisciplinary journals. He is contracted as a co-editor in the production of Documents on Australian Foreign Policy on War and Peace, 1914-1919, which will be published in 2017. He is also the sole editor for a collection contracted with Palgrave Macmillan entitled Citizenship in a Transnational Perspective: Australia, Canada, and New Zealand.  He has held visiting fellowships and professorships at the Australian National University, Carleton University, and the Victoria University of Wellington, and he was awarded his doctorate in history at the University of Sydney in 2011. Jatinder was also a recipient of the prestigious Endeavour International Postgraduate Research Scholarship by the Australian government and an International Postgraduate Award by the University of Sydney for his doctoral research.

The event is free and open to the public. RSVPs are encouraged - please RSVP here or through Eventbrite.