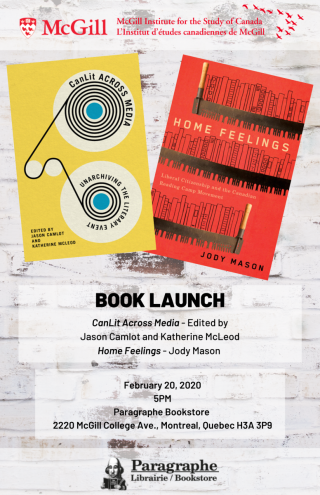 Book Launch of CanLit Across Media: Unarchiving the Literary Event edited by Jason Camlot and Katherine McLeod and Home Feelings by Jody Mason.

The launch will feature two 10 minute presentations by the books editors and author, and will be followed by a cocktail. Books will be available for purchase at the event.

An innovative collection that evaluates diverse methods of recording, archiving, and remediating literature and literary culture in Canada.

The materials we turn to for the construction of our literary pasts - the texts, performances, and discussions selected for storage and cataloguing in archives - shape what we know and teach about literature today. The ways in which archival materials have been structured into forms of preservation, in turn, impact their transference and transformation into new forms of presentation and re-presentation.

Exploring the production of culture through and outside of the archives that preserve and produce CanLit as an entity, CanLit Across Media asserts that CanLit arises from acts of archival, critical, and creative analysis. Each chapter investigates, challenges, and provokes this premise by examining methods of "unarchiving" Canadian and Indigenous literary texts and events from the 1950s to the present. Engaging with a remediated archive, or "unarchiving," allows the authors and editors to uncover how the materials that document past acts of literary production are transformed into new forms and experiences in the present. The chapters consider literature and literary events that occurred before live audiences or were broadcast, and that are now recorded in print publications and documents, drawings, photographs, flat disc records, magnetic tape, film, videotape, and digitized files.

Showcasing the range of methods and theories researchers use to engage with these materials, CanLit Across Media reanimates archives of cultural meaning and literary performance.

A history of the Canadian reading camp movement and the meanings of literacy, literature, and citizenship in the early twentieth century.

Literature, literacy, and citizenship took on new and contested meanings in early twentieth-century Canada, particularly in frontier work camps. In this critical history of the reading camp movement, Jody Mason undertakes the first sustained analysis of the organization that became Frontier College in 1919.

Employing an interdisciplinary approach, Home Feelings investigates how the reading camp movement used fiction, poetry, songs, newspapers, magazines, school readers, and English-as-a-second-language and citizenship manuals to encourage ideas of selfhood that were individual and intimate rather than collective. Mason shows that British-Canadian settlers' desire to define themselves in relation to an expanding non-British immigrant population, as well as a need for immigrant labour, put new pressure on the concept of citizenship in the first decades of the twentieth century. Through the Frontier College, one of the nation's earliest citizenship education programs emerged, drawing on literature's potential to nourish "home feelings" as a means of engaging socialist and communist print cultures and the non-British immigrant communities with which these were associated.

Shifting the focus away from urban centres and postwar state narratives of citizenship, Home Feelings tracks the importance of reading projects and conceptions of literacy to the emergence of liberal citizenship in Canada prior to the Second World War.