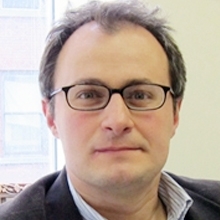 Dr. Maziar Divangahi is an Associate Professor of Medicine at McGill University. Dr. Divangahi is the Associate Director of the Meakins-Christie Laboratories, Co-Leader of the Respiratory Program at McGill University Health Centre, and the Associate Director of the McGill International TB Centre. He is an internationally recognized pulmonary immunologist and the overarching focus of his research program is to investigate the regulatory mechanisms involved in innate and adaptive immunity against two major pulmonary pathogens, Mycobacterium tuberculosis, influenza virus (H1N1), and to understand the critical differences between protective and deleterious immune responses. He is currently investigating how to harness the power of innate immunity in vaccine against tuberculosis via reprogramming of hematopoietic stem cells. Throughout his career, he has published in outstanding journals and received numerous awards, including a CIHR New Investigator Award, FRQS Award, and most recently the CIHR Foundation grant. He is currently holding the Strauss Chair in Respiratory Diseases.