On June 17, 2022, states gathered at the United Nations (U.N.) in Geneva to discuss the final draft of a potentially ground-breaking political declaration that sets new and express standards for the protection of civilians from the use of bombs, rockets, artillery and other explosive weapons in populated areas during armed conflict.

The declaration comes not a moment too soon. According to Action on Armed Violence, during the past decade, more than 238,000 civilians were killed or injured by explosive weapons. When explosive weapons are used in populated areas, civilians account for 90 per cent of casualties. The relentless bombing and shelling of villages, towns and cities in Ukraine by Russian armed forces provides a horrifying example of the devastating pattern of civilian harm that inevitably results from this practice, manifested in the death and injury of more than 4,000 civilians, widespread population displacement within and across Ukraine’s borders, and the destruction of homes, hospitals, schools, shops and essential infrastructure such as water and electricity supply systems, the detrimental effects of which will be felt by Ukraine’s population for years to come.

Yet, the inhabitants of Cherniv, Donetsk, Kharkiv, Kyiv, Lviv, and Mariupol are only the latest in an ever-growing line of civilians whose lives have been decimated by explosive weapons; a line that stretches beyond Ukraine to villages, towns, and cities in Afghanistan, Chechnya, Ethiopia, Gaza, Iraq, Libya, Myanmar, the Philippines, Somalia, Syria, Yemen and elsewhere, affecting over 120 different countries. For more than a decade, the U.N., the International Committee of the Red Cross (ICRC), and the International Network on Explosive Weapons  (INEW), a coalition of nongovernmental organizations (NGOs), have pressed governments to address the humanitarian impact of the use of explosive weapons in populated areas, once described by the U.N. Secretary General as “the primary killer of civilians in conflict.” The meeting on June 17 in Geneva was the final in a series of consultations that began in November 2019, under the leadership of Ireland, to draft a political declaration to respond to the problem. The consultations have involved around 65 states, including some key users of explosive weapons, notably, the U.S., U.K. and other NATO members, but not, unsurprisingly, states such as Russia, Saudi Arabia and Syria. The declaration will be formally open for endorsement by states at an adoption conference in Dublin later this year.

The draft “political declaration on strengthening the protection of civilians from the humanitarian consequences arising from the use of explosive weapons in populated areas” consists of two parts: a preamble and an operative section. The preamble sets the scene, noting that as armed conflicts have become more protracted, complex, and urbanised, the risks to civilians have increased and must be addressed. These risks involve a range of factors, including the use of explosive weapons in populated areas, which has a devastating impact on civilians and civilian objects. It further notes that the risks to civilians from explosive weapons increase depending on the weapon’s explosive force, its level of accuracy, and the number of munitions used. This is a nod to the concept of explosive weapons with wide area effects. Such weapons were identified early on in discussions between States, the U.N., ICRC and civil society as a leading cause of death, injury and longer-term harm to civilians and a necessary focus of any future political declaration.

The preamble includes a detailed description of the broad range of humanitarian and other impacts, including death and injury of civilians and severe and long-lasting indirect or “reverberating effects” which result from damage to or destruction of critical civilian infrastructure such as water and energy systems. It further notes that “many armed forces” – though by no means all – have already implemented policies and practices designed to avoid or minimise civilian harm; nonetheless, there remains much need for “practical improvements to achieve full implementation of international humanitarian law [IHL]”.

The preamble also recognizes “the importance of efforts to record and track civilian casualties, and the use of all practicable measures to ensure appropriate data collection,” which involves data disaggregated by sex and age when feasible. Improved data would help “to inform policies designed to avoid, and in any event minimise, civilian harm; aid efforts to investigate harm to civilians; support efforts to determine or establish accountability, and enhance lessons learned processes in armed forces.” It also recalls and reaffirms the applicability of existing IHL (particularly, the rules relating to distinction, proportionality, and precautions) to the conduct of hostilities and the use of explosive weapons in populated areas by both State and non-state parties to conflict.

The operative section provides a series of measures that endorsing states will be expected to implement as part of their overall commitment to “strengthening the protection of civilians and civilian objects during and after armed conflict, addressing the humanitarian consequences arising from armed conflict involving the use of explosive weapons in populated areas, and strengthening compliance with and improving the implementation of [IHL].”

Key among these is the commitment in paragraph 3.3 that states will

“[e]nsure that [their] armed forces adopt and implement a range of policies and practices to help avoid civilian harm, including by restricting or refraining as appropriate from the use of explosive weapons in populated areas, when their use may be expected to cause harm to civilians or civilian objects” (emphasis added).

Another crucial commitment in the operative section is contained in paragraph 3.4 where states will commit to ensure that their armed forces,

“including in their policies and practices, take into account the direct and indirect effects on civilians and civilian objects which can reasonably be foreseen in the planning of military operations and the execution of attacks in populated areas, and conduct damage assessments, to the degree feasible, and identify lessons learned.”

The reference to BDAs was criticised on the grounds that it refers to a specific military practice that is principally intended to understand the impact of an attack on the target and to make recommendations for further attacks. Research by Article 36 undertaken by this author, found that BDAs are neither regularly used nor suitable for understanding the impact of military operations on civilians and for supporting changes to tactics, lessons learned, and broader policy development in support of more effective protection. It recommended that the reference to BDAs be deleted and replaced with a commitment to establish the capabilities to track in real time, analyze, respond to and, crucially, learn from incidents of civilian harm and damage to civilian objects resulting from military operations and the use of explosive weapons.

The operative section also includes commitments relating to collecting and sharing data on the direct and indirect effects on civilians of the use of explosive weapons in populated areas (as distinct from civilian harm tracking) and facilitating the data collection efforts of the UN, ICRC and civil society organisations. It also commits States to provide, facilitate, and support assistance to victims of explosive weapons, their families and communities and to facilitate rapid, safe, and unhindered humanitarian access to those in need in situations of armed conflict.

The Crucial Work of Implementation

Lastly, the declaration provides a follow-on process, delineated under paragraph 4.7. Endorsing states commit to meet on a regular basis to review the declaration’s implementation and identify additional measures that may be required. These meetings could include the exchange and compilation of good policies and practices and an exchange of views on emerging concepts and terminology. Already at the June 17 consultations, which I attended, a number of states expressed interest in further developing the understanding of indirect and long term effects, i.e., reverberating effects. The meetings will also be open to the U.N., ICRC and civil society. Their participation was not a given in previous iterations of the text, and it is important that it has been remedied. After all, without the work of the U.N., ICRC and civil society in raising awareness of the issue, developing the concepts of “wide area effect weapons” and “reverberating effects,” and repeatedly pressing states to respond, states may have been less inclined to take the action they have in the new declaration.

At the June meeting, states expressed overwhelming support for Ireland’s leadership of the process over the past three years (particularly in the difficult circumstances posed by the pandemic) and for the text of the draft declaration. Several noted that the declaration struck an important and careful balance and is a “meaningful text,” according to one delegation, and one that “we can all be proud of” in the words of another. The majority of states either expressed their intention to sign the political declaration when it is open for signature at the adoption conference in Dublin later this year or indicated that they are working towards being in a position to do so. These states include Argentina, Austria, Belgium, Brazil, Bulgaria, Chile, Finland, France, Germany, Guatemala, Italy, Japan, Mexico, Netherlands, New Zealand, Norway, Philippines, Poland, South Korea, Spain, Palestine, Sweden, Switzerland, U.K., U.S., and Uruguay. France, the UK, and U.S. were among those states that expressly stated their intention to endorse the declaration. Canada on the other hand, and apparently out of step with its key NATO allies, was among those few states that provided no indication at all as to whether they would aim to join the declaration.

The states that join the declaration will be recognizing that the use of explosive weapons in populated areas is associated with a consistent pattern of harm to civilians – of deaths and injuries, of psychological scars, of population displacement and of long-term damage to the fabric of social and economic life. And the declaration commits states to work to address these harms: to better understand the effects of explosive weapons; to review and develop policies and practices that impose stronger limits on the use of weapons; to assist victims; to work together collaboratively with the wider community of stakeholders, and to strengthen the protection of civilians.

The important thing now will be ensuring broad and diverse state participation in Dublin later in the year.

This article was originally posted to Just Security on July 6, 2022. Prior to joining McGill, Dr. Simon Bagshaw was a Senior Policy Advisor with the United Nations Office for the Coordination of Humanitarian Affairs (OCHA) in Geneva and New York. Dr. Bagshaw worked for OCHA for 18 years, developing OCHA and broader United Nations policy on the protection of civilians in armed conflict and forced displacement. 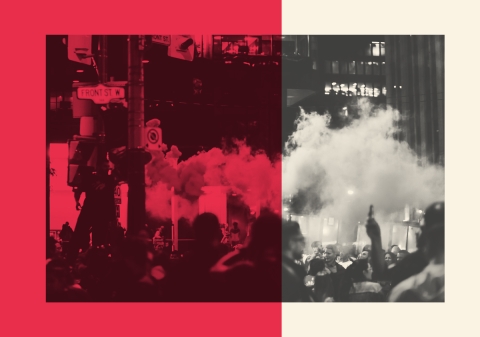 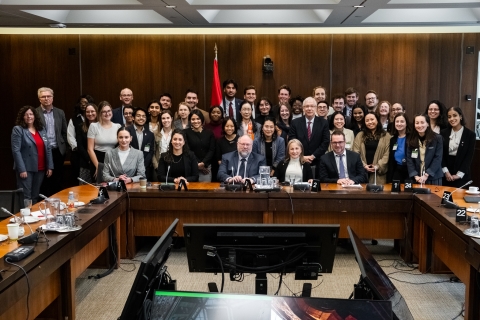 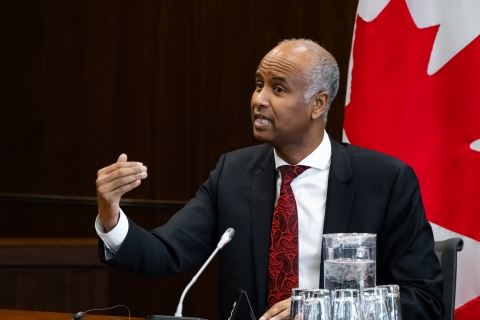 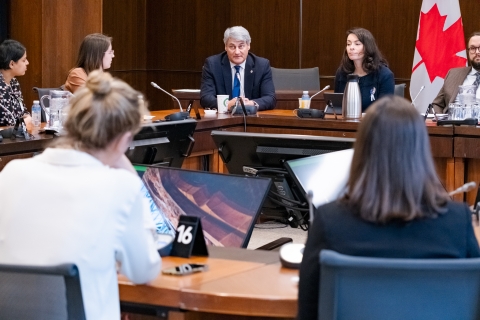 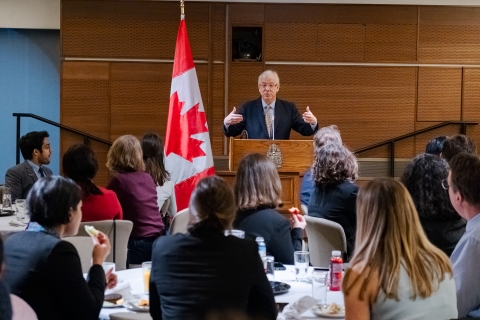 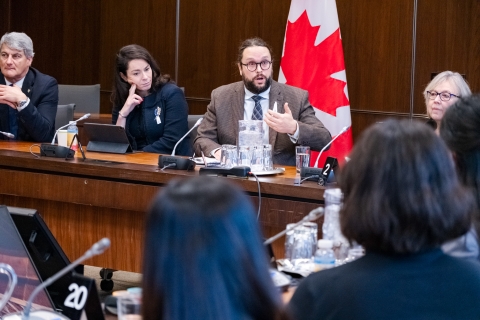