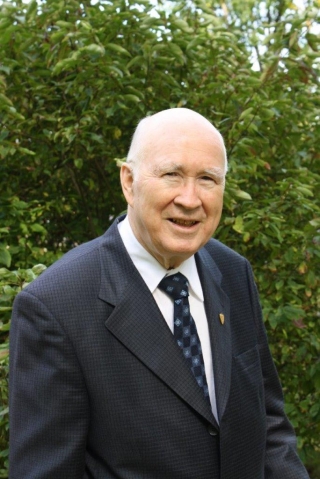 John and his brother Bill [Ogilvie], BSc(Agr)’56, two fellows from tough old Ottawa East but with a school-teaching mom from near Maxville, Ontario (as described by Bill), followed their father to Macdonald College. Their father only got in one year before signing up for the First World War and then never returned to Mac. John graduated with a BSc(Agr), specializing in agricultural engineering from Macdonald College of McGill University in 1954. He then did his MSA in agricultural engineering at the Ontario Agricultural College of the University of Guelph, after which he worked as an extension engineer with the Ontario Ministry of Agriculture, Food and Rural Affairs. He joined the Department of Agricultural Engineering at Macdonald College in 1963. He brought with him his wife Ethel and sons David and Robert, who both have fond memories of growing up on campus. John worked his way up the ranks to Associate Professor and Chairman of the Department from 1971-1977 while also completing his PhD in agricultural engineering at Purdue University. He moved to the University of Guelph in 1977, as Director of the School of Engineering, directing the School until 1988. He conducted teaching and research as a professor in the School of Engineering at Guelph until his retirement in 1995, when he was named Professor Emeritus.

John’s areas of expertise were agricultural structures, waste management, operations research, linear programming and critical-path scheduling. He contributed his expertise to the operations of the Macdonald Farm, its buildings and waste management facilities. He was one of the pioneers of digital computing and will be remembered for introducing computers into the teaching and research programs in agricultural engineering at Macdonald. As a professor, he would make sure all students understood the concepts he was presenting – he would stay in the class as long as was needed. John was regarded as one of the very influential leaders of modern-day agricultural engineering in Canada, and in other parts of the world. He was very dedicated to the work of the Canadian Society of Bio-Engineering, organizing the Society’s annual meetings, and was President of the Society from 1985-1986. John received many awards from the Society and was elected a Fellow of the Canadian Society of Bio-Engineering and the American Society of Agricultural and Biological Engineering in recognition of his immense contributions to the profession.

Son Robert remembers the family driving to conferences through the summer months in the US and Canada, where John would present papers. “I have heard so many accolades about the papers Dad produced and presented at these conferences that I now appreciate how hard he worked for his chosen profession and what an example he was to so many.”

Bill reminisces about his big brother John and the role he played during their time together at Mac: “He was a great mentor and being two years ahead at Mac was senior enough to be accepted as a leader. He introduced me to the weekly Macdonald paper, the Failt-ye Times, and I started as sports editor when he was editor. When John graduated in ’54 he kindly left me his Model A Ford. What a gift for a struggling student – it got me to a summer job near Windsor and back to Mac again. John continued his mentoring after I graduated and was working full time, suggesting that I pursue an MBA at Western. This sage advice turned my two degrees into an interesting and fulfilling career.”

He was a very proud Macdonald alumnus – as Class of 1954 President, he maintained close ties with his classmates right until the end. He was instrumental in keeping the connection alive for reunion gatherings, writing and preparing class newsletters, spearheading class fundraising projects and, of course, delighted in being back on campus whenever possible. In recognition of his sustained volunteerism to the Macdonald Branch of the McGill Alumni Association, his loyalty to Macdonald and his standing in the profession, he received the Macdonald Distinguished Alumni Award in 2010.

According to classmate Bruce Jones, BSc(Agr)’54, “becoming roommates cemented our friendship as we got to know each other quite well. He was involved in many activities as a student but was already demonstrating his academic aptitude and interest in continued learning. Many years after graduation, I was happy to work with John on raising money for the Class Scholarship we endowed at Macdonald and assist as needed with the class newsletter. In 2012, John was diagnosed with Parkinson’s disease and as the years progressed, the disease took its toll on John’s mobility, speech and eyesight but not his mental capacity. Up until 2019, he was able to format the class newsletter as I collected all the news items from classmates. We started out as classmates but became close friends and he will be missed.”

John is survived by sons Robert and David, daughter-in-law Linda Mae and grandchildren Liam and Ella. “I know I’ve learned a lot in the last few years about ‘the quiet guy’ I called my Dad,” says Robert. “By attending events with him I’ve heard from many people, organizations and associations he was connected to since his passing. Consistently, they talk about what a good person he was, how helpful he was in terms of his attention, his time and his financial support. They also talked about his willingness to go out of his way to help those that asked and to take on projects no one else wanted because he felt they should be done. And somehow he always managed to remain a gentleman! I would say he was the perfect dad, as this is how I remember him as well. Now he is gone, but never forgotten.”