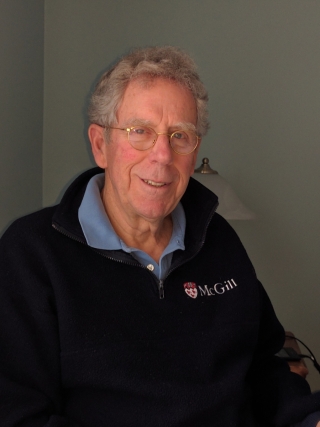 Professor Peter G. Brown (Natural Resource Sciences) has been selected as the recipient of the US Society for Ecological Economics 2017 Herman Daly Award for outstanding contributions to the field of ecological economics.

Professor Brown's nomination citation stated that "his intellectual contributions have ranged from environmental ethics to practical proposals for trusteeship institutions. As a teacher he has inspired many students, at University of Maryland, at McGill, and all over the world through his writings. In addition Peter has been an entrepreneur in founding university programs that embrace and encourage ecological economics, most notably and recently the Economics for the Anthropocene program uniting the efforts of McGill, York, and University of Vermont. And in his spare time, in addition to nurturing students and protecting colleagues, he has planted many thousands of trees!"

​​​​The Herman Daly Award was established in 2003 in honor of one of the visionaries and founders of ecological economics, Herman Daly. The award is designed to recognize outstanding contributions to the field, and acknowledges individuals who have connected ecological economic thinking to practical applications and solutions that are sustainable in scale, equitable in distribution, and efficient in allocation.

"I think the connection that needs to be made in the public mind is that the epic tragedy of the sixth extinction is a by-product, in part, of an economic system that seeks to always stimulate more consumption.  The accelerating decline in life’s prospects is an artifact of what is taught in “leading” universities.  Here is where ecological economic is essential, because ecological economics explicitly requires that the economy has to fit the Earth and not the other way around; and humans are members, not master's of the commonwealth of life." says Professor Brown.

Professor Brown's career has concentrated on the practical uses of philosophy to think critically about the goals of society.  Since the 1980s this work has centered on the deterioration of Earth’s life support capacity and the thought systems that facilitate and legitimate this decline. He has written and edited numerous books, and is a frequent speaker.   His most recent book is Ecological Economics for the Anthropocene: An Emerging Paradigm written and co-edited with Peter Timmerman.  He is currently the Principal Investigator of Economics for the Anthropocene: Re-grounding the human/Earth relationship, a partnership between McGill, the University of Vermont, and York University in Toronto.  With a budget of over five million dollars it aims to educate over 40 PhD’s in the foundations of ecological economics. It offers critical perspectives on the foundations of neo-classical economics, finance, law, governance and ethics; and first hand experiences in responding the pressing issues relating to water, energy, climate justice, and all species food security.

Professor Brown was a recent speaker at the United Nations Commemorative Meeting on International Mother Earth Day 2017, as part of the UN Harmony with Nature interactive dialogue. (Click the link above to listen to the presentation).