Annual Lecture By Rana Mitter "INTERNATIONALISM, IDENTITY, AND IDEOLOGY IN THE SHAPING OF POSTWAR CHINA AND THE LEGACY FOR TODAY" 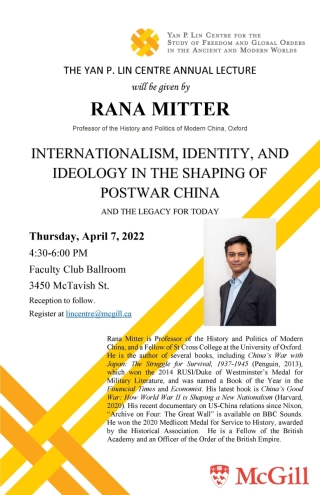 Professor of the History and Politics of Modern China, Oxford

Register at lincentre [at] mcgill.ca

Rana Mitter is Professor of the History and Politics of Modern China, and a Fellow of St Cross College at the University of Oxford. He is the author of several books, including China’s War with Japan: The Struggle for Survival, 1937-1945 (Penguin, 2013), which won the 2014 RUSI/Duke of Westminster’s Medal for Military Literature, and was named a Book of the Year in the Financial Times and Economist. His latest book is China’s Good War: How World War II is Shaping a New Nationalism (Harvard, 2020). His recent documentary on US-China relations since Nixon, “Archive on Four: The Great Wall” is available on BBC Sounds. He won the 2020 Medlicott Medal for Service to History, awarded by the Historical Association. He is a Fellow of the British Academy and an Officer of the Order of the British Empire.