Still Listening – An Exhibit of Works in Honour of Pauline Oliveros 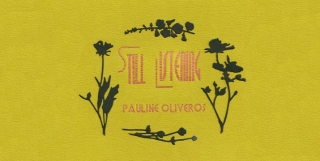 Still Listening, the exhibition of 87 commissioned scores in honour of the life and work of Pauline Oliveros, opens Thursday, June 1 at the McGill Music Library, as part of the 2017 IICSI-McGill (in association with the Institute for the Public Life of Arts+Ideas), Still Listening colloquium. This year’s McGill-IICSI conference is focused on improvisation and listening, with a particular emphasis on Pauline Oliveros, whose passing this past November 2016, leaves us with a rich legacy of compositions, improvisations, theory, activism, community building, design, and a wide network of individuals and institutions that were influenced in many ways by her example, thoughts, sounds and actions.

Still Listening, the exhibition, was conceived by Eric Lewis and Ellen Waterman, and curated by Dancy Mason, Katherine Horgan and Landon Morrison.

The exhibition is free and open to all.

An opening reception for this exhibit will be held on June 1 from 5-7pm in the Marvin Duchow Music Library.