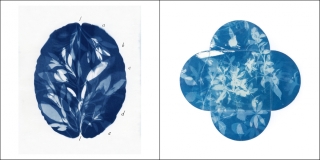 Materia Medica is an exhibition of recent work by Montreal artist Loren Williams.  Invited by the Osler Library of the History of Medicine to create a body of work on the theme of Montreal’s medical history, and recipient of the Michele Larose - Osler library Artist in Residence Programme for 2017, the artist combines artifacts from the Osler collection with collected and created traces of Montreal’s medical past.

The work in this exhibition draws inspiration from books and artifacts in the Osler Library as well as a wide variety of other sources.  In particular, early maps of the city offer a form of time travel, indicating the location of the first hospitals and their large gardens used for food and medicinal plants.  Three hundred year old streets such as rue de l’Hopital and rue des Soeurs Grises still exist in Montreal today, drawing direct lines to Montreal’s medical history, as do streets named Jeanne Mance, Marguerite d’Youville and Penfield.

Interested in these traces that reference Montreal’s medical heritage, Loren Williams has created a body of images that form a shadow archive. Images of medicinal plants used by the First Peoples and early settlers in Montreal were created using a 19th century camera-less photographic process called Cyanotype.  The blue coloured images reveal the shadowy forms and details of the plants.  They are like paper X-rays, made from a simple photographic process that uses UV rays, ie. sunlight, to expose the image, and water to develop it, sun and water­­ being the same basic ingredients required by plants.

Over the course of a year, the artist followed charted streets and routes that link Montreal’s past and present. Using epidemiological maps, she explored the sites and neighbourhoods of the city’s devastating outbreaks of Typhus, Cholera, Small Pox and Tuberculosis.  Other plans of the city led her to sites of hospitals, asylums and the longest duel in Canadian history over the building of a new hospital.

Like the collected plants that echo an early botanical pharmacy, Loren Williams also collected and created other traces of medical history.  X-rays and teeth molds reveal the body’s structures, fractures and medical interventions. First aid kits and their compartments double as garden plans for medicinal plants, while hospital architecture is represented in the form of postcards the shape of library index cards.

These works, presented with artifacts from the Osler Library collection, bring together images and objects from the realm of science, art and everyday life, offering an eclectic, less rational, interconnected perspective of Montreal’s medical history.

Loren Williams is a visual artist working predominantly in photography. The passage of time, natural history, museums and obsolete photographic technologies are the inspiration and vocabulary of her practice. Frequently there is a connection between the artwork and the site where it is presented.

Originally from the Kootenays in British Columbia, Loren Williams moved to Montreal in 1993 and received her BFA honours in photography at Concordia University. She has received awards and grants from the federal and provincial art councils and has exhibited her work nationally.

Loren Williams extends much gratitude to Michele Larose, the Osler Library for the History of Medicine, and the Canada Council for the Arts for their generous contribution to this residency and exhibition project.