Exhibit: The Literature of Prescription: Charlotte Perkins Gilman and The Yellow Wallpaper. A Biography of Neurasthenia in the late 19th and early 20th Centuries 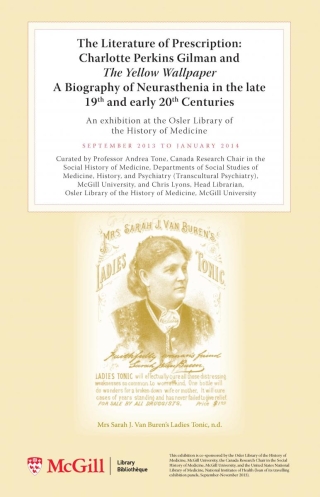 The Osler Library of the History of Medicine is pleased to announce the opening of its newest exhibition, The Literature of Prescription: Charlotte Perkins Gilman and The Yellow Wallpaper.  A Biography of Neurasthenia in the late 19th and early 20th Centuries

This exhibition, guest curated by Dr. Andrea Tone, provides a fascinating exploration of neurasthenia, a widely diagnosed but mysterious psychological illness, whose history is brought to life through materials culled from the U.S. National Library of Medicine, the Osler Library’s rich repository of artifacts, and the guest curator’s collection. The biography of neurasthenia is chronicled against a broader backdrop that illuminates significant developments in the rise of modern psychiatry, varied forms of patient narratives and activism, and how gendered expectations can frame, at times elusively, medical thinking, diagnosis, and care.

The Literature of Prescription showcases the doctors who defined neurasthenia, the remedies people purchased to assuage it, and the efforts of one patient, The Yellow Wallpaper author Charlotte Perkins Gilman, to challenge the legitimacy of the disease and the therapy her doctor prescribed.

The exhibition runs from September to April, 2014 in the Osler Library and is accessible during Library opening hours (9 am to 5 pm, Monday to Friday).  The Osler Library is located on the third floor of the McIntyre Medical Sciences Building, 3655 Promenade Sir-William-Osler.  Admission is free