Event | Film screening of "A Memory in Khaki" 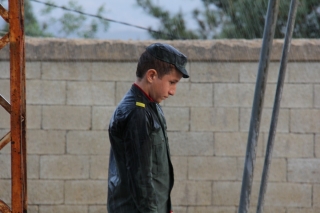 The Islamic Studies Library is pleased to host a screening of A Memory in Khaki by Syrian filmmaker Alfoz Tanjour.

A discussion between film director, Alfoz Tanjour and Dr. Mafalda Ade, course lecturer at the McGill Institute for Islamic Studies, will follow the screening.

A Memory in Khaki presents the director’s personal narrative intertwined with those of fellow countrymen and women forced, because of their political beliefs, to leave the country before, during, or after the revolution (in 2011). Released in 2016, “the film sheds light on years of silence, fear and terror, and dives into the stories behind the eruption of Syria’s civil society and the start of its revolution. It is a Syrian account laying out the past to tell the story of the future.”

Born in Salameh (Syria), in 1975, Alfoz Tanjour graduated in film direction from the Academy of Fine Arts in Moldova in 2004. After making a series of short features, he turned to documentaries in 2009: A Memory in Khaki is his seventh documentary movie.