1919: The Year of the Revolutionary Black Messiah. 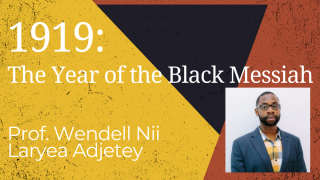 In the early 1900s, white mobs attacked African Americans throughout the United States, lynching and terrorizing hundreds per year. Without citizenship rights and state protections against anti-Black terror, even after shouldering arms for the Allies in World War One, Black people in the United States and Canada yearned for a leader—a deliverer of sorts—who would help redeem the “race.” The year 1919 marked a highpoint in anti-Black violence and Black resistance. In their yearnings, the Black masses, and some leaders, too, embraced a mystical and messianic form of Pan-Africanism. This presentation will explore the dimensions of this racial awakening for Black self-determination in the Atlantic World.

Wendell Nii Laryea Adjetey is a historian of post-Reconstruction United States, specializing on the African American experience. Broadly, his research and writing excavate freedom linkages among the United States, Canada, and other parts of the African Diaspora. Before arriving at McGill, he held the W. L. Mackenzie King Fellowship at Harvard University’s Weatherhead Center for International Affairs and Department of History Lectureship. Dr. Adjetey’s research has garnered prizes and fellowships from many sources: SSHRC, the Pierre Elliott Trudeau Foundation, University of Pennsylvania, Yale, and Princeton, to name a few. In 2017-18, he was Visiting Scholar and Pre-Doctoral Fellow at MIT, and in 2016-17, Visiting Scholar and Senior Resident Fellow at Massey College, University of Toronto.