ISID Congratulates Manuel Balán and Kazue Takamura, recipients of the Principal’s Prize for Excellence in Teaching 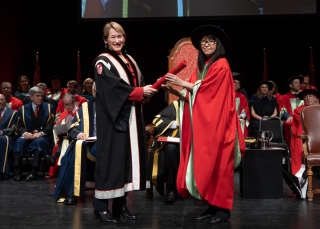 ISID's Professor Manuel Balán, jointly appointed with Political Science, and Professor Kazue Takamura, Faculty Lecturer, were both honoured with the Principal’s Prize for Excellence in Teaching at the Fall 2019 Convocation ceremony.  Both have been previously awarded faculty and departmental awards for the excellence of their teaching.  While Professor Balán was praised by Angela Campbell, Associate Provost (Equity and Academic Policies), “for his exceptional commitment to pedagogy in general and the art and craft of teaching in particular”, of Professor Takamura Campbell said "Dr. Takamura is described by her students as intelligent, inspiring and ‘the most influential and impactful educator I have known'".  The full article describing the ceremony and giving profiles of the recipients can be read in the McGill Reporter.