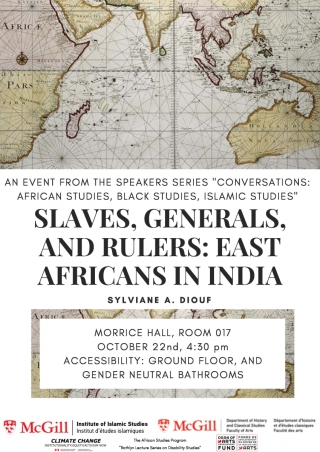 This event is part of a lecture series titled "Conversations: African Studies, Black Studies, and Islamic Studies." The series is sponsored by the Institute of Islamic Studies, the Department of History and Classical Studies, and the African Studies program of the Institute for the Study of International Development. The cosponsor are the SSHRC Climate Change association, the Rathlyn Lecture Series on Disability Studies, the Students in Solidarity for Palestinian Human Rights at McGill, the Black Students' Network at McGill, and the African Studies Students Association.

Join us for Professor Sylviane Diouf's lecture titled "Slaves, Generals, and Rulers: East Africans in India." Sylviane A. Diouf is an award-winning historian of the African Diaspora. She is Visiting Professor at Brown University's Center for the Study of Slavery and Justice and a member of the Scientific Committee of the International Coalition of Sites of Conscience Maison des Esclaves project on Goree Island, Senegal.

A social historian, Dr. Diouf focuses on uncovering essential stories and topics that were overlooked or negated, but which offer new insights into the African Diaspora. She has a special interest in the experience of the Africans deported, through the international slave trade, to the Atlantic and Indian Ocean worlds, including the particular experience of African Muslims.

Dr. Diouf is the author of Slavery’s Exiles: The Story of the American Maroons (NYU Press, 2014); and Servants of Allah: African Muslims Enslaved in the Americas