The Rooibos Benefit-Sharing Agreement: A Ground-Breaking Deal for Indigenous Communities in South Africa and Beyond 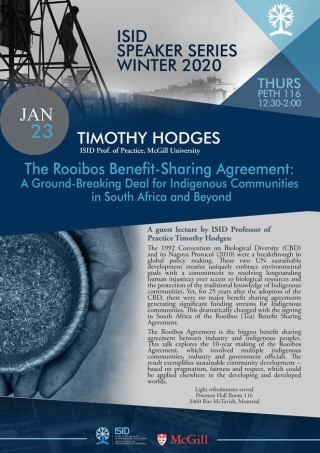 A lecture by ISID Professor of Practice Timothy Hodges as part of ISID's speaker series.

Abstract:  The 1992 Convention on Biological Diversity (CBD) and its Nagoya Protocol (2010) were a breakthrough in global policy making. These two UN sustainable development treaties uniquely embrace environmental goals with a commitment to resolving longstanding human injustices over access to biological resources and the protection of the traditional knowledge of Indigenous communities. Yet, for 25 years after the adoption of the CBD, there were no major benefit sharing agreements generating significant funding streams for Indigenous communities. On November 1, 2019, this dramatically changed with the signing in South Africa of the Rooibos (Tea) Benefit Sharing Agreement. The Rooibos Agreement is the biggest benefit sharing agreement between industry and indigenous peoples. This talk explores the 10-year making of the Rooibos Agreement, which involved multiple indigenous communities, industry and government officials. The result exemplifies sustainable community development -- based on pragmatism, fairness and respect. This case offers many transferable insights, which could be applied elsewhere in the developing and developed worlds (including in Canada).

Bio:  Timothy Hodges joined the Institute in 2015 as Professor of Practice – focusing on the application of strategic foresight methodologies in global affairs and on the negotiation and implementation of international sustainable development treaties.​ A principal focus of his research at ISID is understanding how indigenous communities, in both the South and the North, participate in and benefit from the implementing international sustainable development treaties (such as the UN Framework Convention on Climate Change and the Convention on Biological Diversity.  Currently, he is reviewing the experience of Indigenous Peoples representatives in both negotiating the Nagoya Protocol on genetic resources and traditional knowledge and developing case studies in Indigenous community implementation of the Protocol. Hodges aims to produce pragmatic results in the form of best practices and lessons learned -- which he hopes will in turn support reconciliation in Canada.