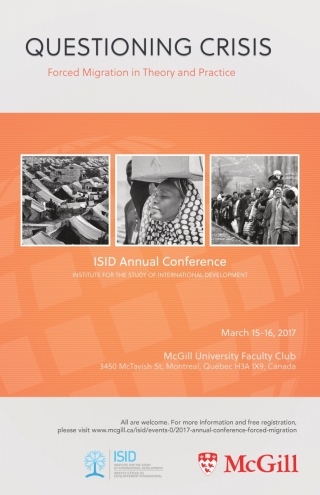 In 2015, UNHCR documented 65.3 million forced migrants worldwide, people who have been displaced across borders or within their own countries by persecution and violent conflict. This figure reveals a staggering 50 percent increase since 2011, and the highest numbers since World War II. But does this contemporary condition constitute a ‘crisis’ or ‘global emergency’? And how does the language of ‘crisis’ and ‘emergency’ affect humanitarian, international, and state responses to the people behind the statistics? While some humanitarian organizations employ the rhetoric of ‘crisis’ to secure funding, state agencies often use it to reinforce political divisions, and even to legitimize militarized policies designed to restrict migrant mobility. Examples include Australia’s deployment of its navy to prevent asylum seekers from reaching its shores, the EU’s employment of Frontex’s ‘Operation Triton’ to police the Mediterranean, and real and proposed erection of walls to seal off borders in Hungary and the United States. But can these practices of state coercion be justified? While some have criticized such responses as signaling erosions of refugee rights, the fractures in the existing framework for defining and protecting forced migrants suggest a need to rethink the ‘refugee regime,’ borne of the 1951 Refugee Convention, which was established to deal with the massive displacement of people in the wake of World War II. The need for critical and innovative thinking in the field of forced migration has never been greater.