Open Beneficiary Feedback: Can It Do for International Development What Open Consumer Feedback Has Done for Business? 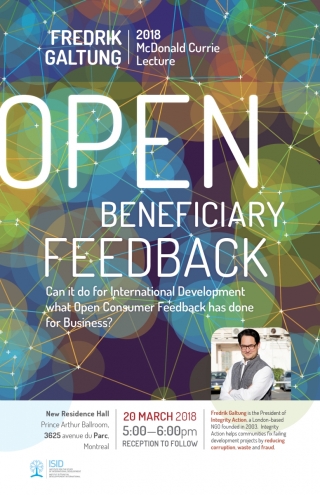 ISID is proud to present the 2018 McDonald Currie Lecture, delivered by Fredrik Galtung.

Fredrik Galtung is the President of Integrity Action, a London-based NGO founded in 2003.  Integrity Action helps communities fix failing development projects by reducing corruption, waste and fraud. This work has delivered improved services for more than 5 million people across a dozen countries. He has consulted on strategic corruption control in more than 40 countries. He has also advised heads of state and government in Africa, Asia and Latin America as well as major corporations and most of the international development organisations like the United Nations and World Bank. Fredrik is considered an expert on measurements and metrics pertaining to corruption, fraud and organisational integrity. He was the Head of Research of Transparency International for 10 years, having joined the organization as its first employee. He studied political economy at the University of Oslo, Hawaii and Cambridge. He is a Norwegian national.