How the Party Commands the Gun: The Foreign-Domestic Threat Dilemma in China 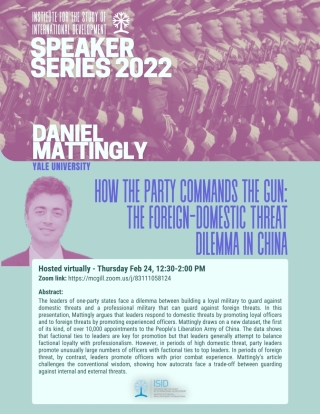 A guest lecture by Daniel Mattingly of Yale University

Abstract:
The leaders of one-party states face a dilemma between building a loyal military to guard against domestic threats and a professional military that can guard against foreign threats. In this presentation, Mattingly argues that leaders respond to domestic threats by promoting loyal officers and to foreign threats by promoting experienced officers. Mattingly draws on a new dataset, the first of its kind, of over 10,000 appointments to the People's Liberation Army of China. The data shows that factional ties to leaders are key for promotion but that leaders generally attempt to balance factional loyalty with professionalism. However, in periods of high domestic threat, party leaders promote unusually large numbers of officers with factional ties to top leaders. In periods of foreign threat, by contrast, leaders promote officers with prior combat experience. Mattingly’s article challenges the conventional wisdom, showing how autocrats face a trade-off between guarding against internal and external threats.

Speaker bio:
Daniel Mattingly is an Assistant Professor in the Department of Political Science at Yale University. His research focuses on the politics of authoritarian regimes, historical political economy, and China. His book The Art of Political Control in China (Cambridge, 2020) received the best book award from the Democracy and Autocracy Section of APSA, was the winner of the Gaddis Smith International Book Prize, and was named one of the best books of 2020 by Foreign Affairs.