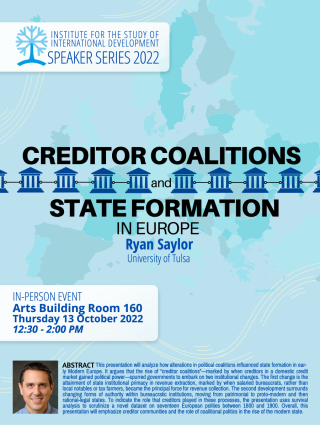 This paper analyzes how alterations in political coalitions influenced state formation in early modern Europe. It argues that the rise of “creditor coalitions”—marked by when creditors in a domestic credit market gained political power—spurred governments to embark on two institutional changes. The first change is the attainment of state institutional primacy in revenue extraction, marked by when salaried bureaucrats, rather than local notables or tax farmers, became the principal force for revenue collection. The second development surrounds changing forms of authority within bureaucratic institutions, moving from patrimonial to proto-modern and then rational-legal states. To indicate the role that creditors played in these processes, the paper uses survival analysis to scrutinize a novel dataset on seventeen European polities between 1600 and 1900. Overall, this paper emphasizes creditor communities and the role of coalitional politics in the rise of the modern state.