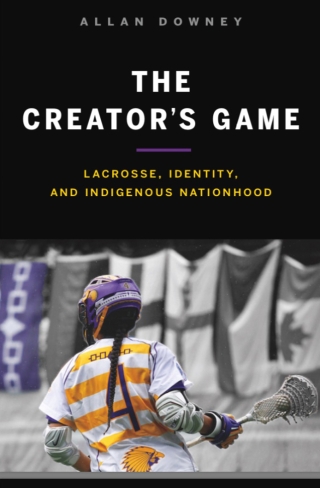 On February 1st, Professor Allan Downey, chair of the Indigenous studies program, released his first full-length monograph: The Creator’s Game: Lacrosse, Identity, and Indigenous Nationhood. The text examines how lacrosse, a game that historically has been a central element of many Indigenous cultures for centuries, has come to play an important role in the shifting politics of Indigenous efforts to assert self-determination.

A gift from the Creator – that is where it all began. […] once non-Indigenous players entered the sport, it became a site of appropriation – then reclamation – of Indigenous identities. Focusing on the history of lacrosse in Indigenous communities from the 1860s to the 1990s, The Creator’s Game explores Indigenous-non-Indigenous relations and Indigenous identity formation. While the game was being stripped of its cultural and ceremonial significance and being appropriated to construct a new identity for the nation-state of Canada, it was also being used by Indigenous peoples for multiple ends: to resist residential school experiences; initiate pan-Indigenous political mobilization; and articulate Indigenous sovereignty and nationhood on the world stage.

The multilayered story of lacrosse serves as a potent illustration of how identity and nationhood are formed and reformed. Engaging and innovative, The Creator’s Game provides a unique view of Indigenous self-determination in the face of settler-colonialism.

The book was called “provocative, creative, and ambitious” by Michael Dawson, professor of history and associate vice-president (research) at St. Thomas University; and a “richly insightful and compelling work that will pave the way for future studies that employ Indigenous methodologies and epistemologies,” by Nancy Bouchier, professor of history and associate member of the Department of Kinesiology at McMaster University.

In 2017, Downey was awarded the Principal’s Prize for Outstanding Emerging Researchers by McGill Principal Suzanne Fortier. He was also awarded a 30 in 30 Award by the Wilfrid Laurier University’s Graduate Student Association and a CHA Aboriginal History Article Prize in 2017. As the chair of the Indigenous studies program, among his notable achievements are his contribution to the University’s strategic plan for responding to the Canadian Truth and Reconciliation Commission’s Call to Action and his dedication to engaging the McGill community as well as local Indigenous communities through events like the Indigenous Knowledge Holder Series, in addition to film screenings, lectures, workshops and other events, along with working with educational and cultural institutions.

The Creator’s Game is published by UBC Press, hardcover copies can be ordered here, but don’t expect it to arrive soon as it is temporarily sold out. It is still available as a PDF and the hardcover is expected be back in stock soon. All proceeds from its sale go to the Nak'azdli Whut'en Youth Centre in Fort St. James, British Columbia. 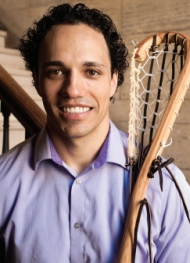 Allan Downey is Dakelh, a member of the Nak'azdli First Nation, and an Assistant Professor in the Department. His current book project, The Creator’s Game, focuses on the history of lacrosse in Indigenous communities from 1867-1990 to better understand Native-Newcomer relations and Indigenous identity formation. Utilizing a case study approach, ethno-historical methods, and placing an emphasis on community collaborations, Allan demonstrates that the history of lacrosse serves as a potent illustration of how identity is formed, reformed, and how at times competing interest groups attempt to claim a source of identity as their own.
Last updated: 06/02/2020 - 16:33
Back to top
McGill University
Copyright © 2023 McGill University
Accessibility Log in