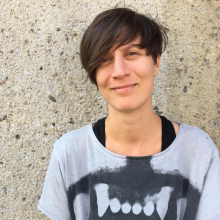 Lynn Kozak has published on the Iliad, Thucydides, and Greek tragedy, and has broader interests in Plato, the Second Sophistic, the reception and production of Greek performance texts, modern comparative texts, and critical theories. Current research focuses on serial poetics in ancient epic and in contemporary North American television, building on their monograph on this subject, Experiencing Hektor: Character in the Iliad, released in 2016 with Bloomsbury Academic (open-access here). Recent publications (2018-20) include the co-edited volume The Classics in Modernist Translation with Miranda Hickman, and articles on H.D.'s translations of Greek tragic choruses (with Miranda Hickman), Homeric fandom in Greek tragedy, and the politics of FOX's The Exorcist. Forthcoming articles and book chapters focus on recall strategies in serial narratives, including the Iliad and Stranger Things (Netflix), characterisation in iZombie (The CW), genre hybridity in Lucifer (FOX/Netflix), the reception of Achilles and Patroklos in NBC's Hannibal, Homeric translation, performance, and dramaturgy, while works-in-progress include pieces on Iliad 17, queerverses in American genre television, and action franchise training paratexts.

Prof. Kozak is the organiser of the annual McGill Classics Play, a member of the Quebec Drama Federation and the Freestanding Room Artists' Collective, as well as the co-founder and co-artistic director (with Carina de Klerk) of Oimoi Productions, providing many students with mentorship and creative opportunities to work with Classical texts and performance within the broader Montreal community. Recent creative collaborations include translations of Hrosvitha's Sapientia and Sophocles' Oedipus Tyrannus (Centaur Theatre Brave New Looks Selection, 2017) for Scapegoat Carnivale Theatre.

From January-August 2018, Kozak translated and performed the whole Iliad in weekly serial instalments, as part of an FRQSC-funded project "Previously On...The Iliad"; all performances are available to view on youtube. They also recently performed a version of the Apologoi from the Odyssey as part of the 2019 Festival Interculturel du Conte.

Pronouns: she/he/they (for press or print, please use "they")