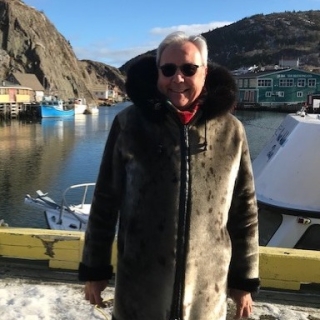 Richard Budgell, newly appointed Associate Professor of Inuit and Northern Health Promotion in the Department of Family Medicine, has a background of more than 30 years as a public servant with the Government of Canada. “My primary motivation throughout my career has been working to enlarge the role and understanding of Indigenous people and to fight systemic discrimination,” says Richard, who completed his Bachelor’s degree in History and Linguistics at Memorial University of Newfoundland and his Master’s degree in Canadian Studies, Indigenous concentration, at Carleton University. As part of his new position in the Department, Richard will be developing and teaching Indigenous course material, conducting research and participating in Indigenous recruitment.

Richard worked in the health field with the Government of Canada for close to 15 years. “What has drawn me to health promotion, family health and public health is their centrality to questions of equality of health outcomes, and justice and fairness for Indigenous people and communities,” he says. Richard’s first experience in health promotion lasted nearly a decade at the Population and Public Health Branch of Health Canada, which became the Public Health Agency of Canada. From 1994 to 2003, he led the development and implementation of an early childhood development program known as Aboriginal Head Start in Urban and Northern Communities, an early intervention program for preschool-age First Nations, Métis and Inuit children and their families. The program was one of the first to have a national advisory committee of Indigenous community representatives.

In addition to spending half of his career working in the health field, Richard, who is of Labrador Inuit and European ancestry, has worked in a multitude of different areas, including Indigenous self-government and land claims negotiations, emergency management in First Nations communities and at the Royal Commission on Aboriginal Peoples. When Richard joined the Montreal office of First Nations and Inuit Health Branch in 2014, he was one of two Indigenous employees in a workforce of around 150. “When I left the office this year, there were more than 20 Indigenous employees. It is still not enough, but a huge improvement. Some of this came from focused recruitment of Indigenous students. There is now more attention paid to Indigenous voices within and outside government, but there is still a need for much more progress,” says Richard. “What is clear is that the entire health system, in Montreal and elsewhere, needs to ensure that there is cultural safety for Indigenous patients that come from all over the province, as well as those of us who live here in the city,” he notes.

As Associate Professor in Inuit and Northern Health Promotion, one of Richard’s priorities is to develop an Inuit health module that could be used in other family medicine courses. “Having recently retired from my career in government, I am interested in taking that experience in advancing the awareness of and participation of Indigenous peoples in large institutions, and applying some of those lessons to McGill,” says Richard. “I think the family medicine approach is very consistent with traditional holistic Indigenous views of health and treating people as members of families and communities.”

Health promotion remains a critical part of Indigenous self-determination. “In most parts of Canada – including Quebec – Indigenous people, communities and institutions are still not seen as full and rightful participants in the management of their own health and well-being. This has deep roots in some Western practices in medicine, and also in the practice of colonialism, that aimed to dispossess Indigenous people of their own autonomy and agency,” explains Richard. He reminds us that to be better allies to Indigenous peoples, we need to “treat people fairly, listen more effectively and like the Aretha Franklin song says, R-E-S-P-E-C-T.”