KIVA REARDON - HEY! How'd you get that? 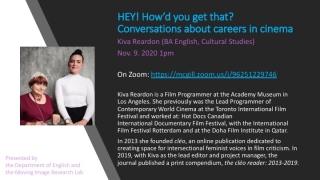 HEY! How'd you get that?

Conversations about careers in cinema with Kiva Reardon

Kiva Reardon (BA English, Cultural Studies) is a leading film programmer, critic and founder of the highly influential journal cléo. She'll be stopping by ENGL 381 for a talk called "HEY! How’d you get that? Conversations about careers in cinema" to talk about how to break into a career in cinema, feminist film practices in criticism and curation, and more.

English and World Cinemas are welcome to join the conversation on Zoom on November 9, 2020 at 1pm.

In 2013 she founded cléo, an online publication dedicated to creating space for intersectional feminist voices in film criticism. In 2019, with Kiva as the lead editor and project manager, the journal published a print compendium, the cléo reader: 2013-2019.