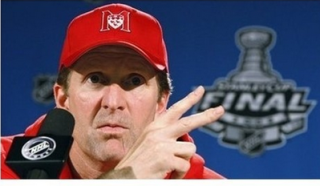 source: Earl Zukerman, McGill Athletics, Feb 3, 2016
MONTREAL – When Mike Babcock (B.Ed. (Physical Education) 1986) steps behind the bench on Thursday for Toronto's home game against the New Jersey Devils, he will become the 25th coach in National Hockey League history to reach the 1,000 plateau for regular season games coached.
The 52-year-old native of Manitouwadge, Ont., who was raised in Saskatoon, Sask., is in his 13th season as a bench boss in the NHL and will be tied with Roger Neilson and Dave Tippett who completed their NHL coaching careers with exactly 1,000 contests under their belts. Next in line is Jacques Demers, who sits at the No.22 spot with 1,007 games coached. The NHL's all-time leader is Scotty Bowman, who coached 2,141 regular season contests in 30 years behind the bench.

He officially began his coaching career in 1988 with Red Deer College of the CCAA, shortly after graduating from McGill University in 1986 with a bachelor of education, where he patrolled the blueline for the Redmen from 1983 to 1986. He also received an honorary doctorate from McGill in 2013.

Babcock captured his first championship ring with the University of Lethbridge at the 1994 CIAU (now known as CIS) University Cup tournament.

In international play, Babcock has represented Canada at several competitions. He became the only coach in hockey history to lead his country to gold in consecutive Olympic appearances after guiding Canada in Vancouver (2010) and Sochi (2014). He led Canada to a gold medal at the 2004 world championships. In 1997, he took part in his first international coaching experience at the IIHF world junior championships as Canada also captured gold. Babcock is the only coach in the so-called 'Triple Gold Club,' an exclusive group of individuals who have captured the three most prestigious championships in hockey (a world championship, an Olympic gold medal and a Stanley Cup).

A thumbnail look at the career of Mike Babcock, who will reach the 1,000 coaching milestone on Thursday (Feb. 4/16):

1986 -- Graduated with a degree in physical education from McGill University, where he played defence and served as captain of the hockey team. He also did some post-graduate work in sports psychology at McGill.

1987-88 -- Served as player-coach of the Whitley Bay Warriors of the British Premier League. He had 34 goals and 132 points in 36 games; the Warriors finished two points out of first place.

1988-91 -- Coached at Red Deer College. His team won the Alberta Colleges Athletic Conference championship in 1989, and he was named ACAC coach of the year.

1993-94 -- Spent one season coaching the University of Lethbridge Pronghorns. He led the team to the CIS University Cup and was the Canada West Universities Athletic Association coach of the year.

1994-2000 -- Coached the Spokane Chiefs of the Western Hockey League. Babcock was named WHL coach of the year in 1996 and 2000 after leading his team to first place in the Western Division and into the WHL finals.

1997 -- Coached Canada internationally for the first time at the world junior championship in Switzerland. Canada won the gold medal, defeating the United States in the championship game.

2000-02 -- Moved to the pros when he was named coach of the Cincinnati Mighty Ducks of the American Hockey League. Cincinnati, the AHL affiliate of the Mighty Ducks of Anaheim and the Detroit Red Wings, had a 74-59-20-7 record under Babcock and qualified for the Calder Cup playoffs in each of his two seasons.

2008 -- Led the Red Wings to the 11th Stanley Cup in franchise history and the fourth since 1997. They defeated the Pittsburgh Penguins in six games in the final.

2009 -- Coached the Red Wings to the Western Conference championship and a second straight berth in the Stanley Cup final, where they were defeated by the Penguins in seven games.

2010 -- Led Canada to the gold medal at the Vancouver Olympics, capped by a 3-2 overtime victory against the United States in the championship game. Babcock became the only coach to join the "Triple Gold Club"; members have won a Stanley Cup, an Olympic gold medal and a world championship.

2014 -- Coached Canada to the gold medal at the Sochi Olympics. His team allowed three goals while going 6-0 and defeating Sweden in the championship game.

2015 -- Led the Red Wings to their 24th consecutive appearance in the Stanley Cup playoffs, and their 10th in his 10 seasons with Detroit. The Red Wings lost to the Tampa Bay Lightning in seven games in the Eastern Conference first round.

2015 -- Announced as head coach of the Toronto Maple Leafs on May 20, 2015. Babcock becomes the 30th head coach in Maple Leafs history, agreeing on an eight-year deal worth a reported $50 million.

For more information about traditional territory and tips on how to make a land acknowledgement, visit McGill's Land Acknowledgement webpage.