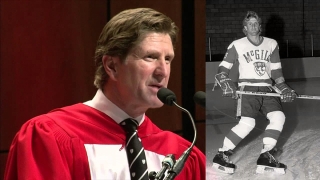 He becomes the first McGill University graduate to be named to the Order, .a Hockey Canada initiative that celebrates individuals for their outstanding contributions or service to the growth and development of the sport. A 12-member selection committee nominates and selects the honourees via secret ballot.

Babcock will be recognized June 18-19 at a gala in London, Ont., along with fellow inductees Danielle Goyette, a two-time Olympic gold medalist, and Ryan Smyth, a former NHL forward and Olympic champion.

"As players and coaches, this group has led the way on and off the ice, teaching and inspiring Canadian players at all levels of the game," said Hockey Canada chief executive officer Tom Renney in a press release. "To be selected as a distinguished honouree of the Order of Hockey in Canada is one of the most prestigious accomplishments one can receive in hockey in Canada, and this year's honourees are well-deserving of the recognition."

Babcock, a 54-year-old native of Manitouwadge, Ont., who was raised in Saskatoon, Sask., skated for the McGill men's hockey team from 1983 to 1987.

During his undergraduate years, he was a two-time all-star defenceman with the Redmen hockey team. He served as co-captain and shared team MVP honours in 1986-87.  Babcock graduated in 1986 with a degree in education and received an honorary doctorate of laws from the University in 2013.

After leaving McGill, he spent a year as a player-coach in England, before returning to McGill, where he took sports psychology courses for another year. From there, he embarked on a long but fruitful coaching career with stops at Red Deer College (CCAA), the Moose Jaw Warriors (WHL), Lethbridge Pronghorns (CIAU), Spokane Chiefs (WHL) and Cincinnati Mighty Ducks (AHL) before making the jump to the NHL, where he has served as bench boss for the Anaheim Ducks, Detroit Red Wings and the Maple Leafs.