Altar for the Day of the Dead: Art Mediator Maria Ezcurra interviewed by Radio-Canada International

"As a group women artists," Ezcurra wrote in a statement describing the altar, "we want to offer this ofrenda to the hundreds of Indigenous women and girls that have been murdered in Canada, and the rest of the continent, over the past decades. We are also considering the many missing women in this altar, which purpose is remembrance: we acknowledge that not being physically present isn’t the same as being gone.

"With this ofrenda installed at the Faculty of Education, we want to acknowledge the traditional territory of the Kanien’kehá:ka people where we stand today, celebrating our ancestors and sharing diverse Indigenous culture with the community of McGill (the altar will have elements from Indigenous communities from both Mexico and Canada). Moreover, we want to honour the lives of all the Indigenous women and girls that have gone missing or have been murdered in Canada as a way to bring awareness to the widespread violence against Indigenous women and girls, and gender-based violence in general." 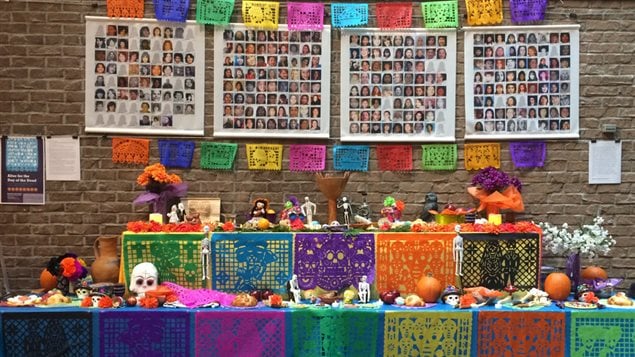