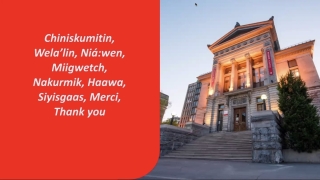 As Spring Convocation season draws to a close, a Scarf Ceremony celebrating graduating Indigenous students was held on Monday, June 20th, during which 110 First Nations, Inuit and Métis students were honoured for completing their certificates and programs across McGill University's Schools and Faculties, at both the undergraduate and graduate levels.

In total, 13 Deans and program representatives, including our own Dean Yolande E. Chan, were on hand to send off this year's graduates with inspiring addresses. Kahnawake Elder Kevin Ka’nahsóhon Deer, who graduated from McGill in 1996 with a Bachelors of Education in First Nations Education also spoke at the ceremony, in addition to performances by Theresa Bear Fox and Nina Segalowi, and special guest speaker Gabrielle Yakotennikonhrare Doreen. A mother, grandmother, educator and award-winning scholar, Doreen taught as part of McGill’s Indigenous Studies Program from 2017-2021.