Peter Todd Steps Down as Dean of Desautels 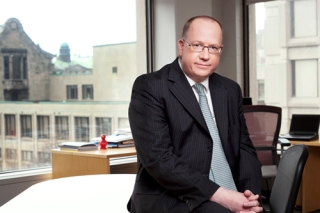 After nine years at the helm, Dr. Peter Todd (BCom’83) has stepped down as Dean of McGill University’s Desautels Faculty of Management on April 30, 2014.

“My time as Dean has been a great learning experience for me and has been personally rewarding, particularly so from the opportunity to work with, and learn from, so many talented members of the Desautels and McGill community,” he said. “I leave this role proud of what we have accomplished and satisfied that we have, together, strengthened a foundation on which to develop the Faculty into the future.”

During his tenure, Dr. Todd spearheaded the greatest renewal the Faculty has ever seen, particularly in focusing on an integrated approach to management education and research, and for being instrumental in launching a new self-funded MBA program. Over this time of significant transformation, the Faculty’s operating budget doubled. In 2012, he received the McGill Alumni Association’s David Johnston Award for his exemplary fundraising work on behalf of the McGill Annual Fund. He also served as Co-Chair of the McGill Centraide campaign together with McGill’s Vice-Principal of Administration and Finance, Michael Di Grappa, helping the University surpass its 2013 goal of $400,000.

Many people and service improvements were initiated during his tenure, including an expansion of the professoriate by more than 50%, the doubling of the number of BCom academic advisors, growing investments in career services, and renovated facilities for BCom, MBA and PhD students.

Dr. Todd is especially well-regarded for supporting the development of new programs and curricula at Desautels over the last years, including:

In honour of Dr. Todd’s departure, members of the Desautels Faculty Advisory Board, alumni, faculty, staff and students raised over $518,000 to establish the “Connie and Peter Todd International Internship Award.” This award will support several BCom students per year undertaking international internships in not-for-profit organizations.  Dr. Todd expressed that he and his wife Connie were both “very touched by this generous gesture.”

As for the future, Dr. Todd said he intends to “head off to rest, reflect and regroup” for now. A committee led by McGill’s Provost has begun an international search for a new dean, and details of that process will be announced when they are available.

Associate Dean (Academic), Professor Morty Yalovsky has stepped in as Interim Dean of Desautels until a replacement is secured. Within McGill, Professor Yalovsky has served as Vice-Principal (Administration and Finance) as well as Dean of Continuing Education; he has been a member of many University level Committees including Senate, Senate Nominating and APPC. His research areas at the Desautels Faculty of Management include Statistical Methodology, Forecasting Methods and Modeling and he has consulted in the areas of Applied Statistics and Information Technology for several leading Canadian corporations.