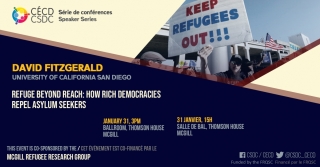 The Centre for the Study of Democratic Citizenship presents:

You can learn more about Professor Fitzgerald by clicking here.

This event is co-sponsored with the McGill Refugee Research Group.

Abstract: The core of the asylum regime is the principle ofnon-refoulement that prohibits governments from sending refugees back to their persecutors. Governments attempt to evade this legal obligation to which they have explicitly agreed by manipulating territoriality. A remote control strategy of “extra-territorialization” pushes border control functions hundreds or even thousands of kilometers beyond the state’s territory. Simultaneously, states restrict access to asylum and other rights enjoyed by virtue of presence on a state’s territory, by making micro-distinctions down to the meter at the border line in a process of “hyper-territorialization.” Refuge beyond Reach analyzes remote controls since the 1930s in Palestine, North America, Europe, and Australia to identify the origins of different forms of remote control, explain how they work together as a system of control, and establish the conditions that enable or constrain them in practice. It argues that foreign policy issue linkages and transnational advocacy networks promoting a humanitarian norm that is less susceptible to the legal manipulation of territoriality constrains remote controls more than the law itself. The degree of constraint varies widely by the technique of remote control. FitzGerald engages fundamental theoretical questions about the extent to which norms and institutions shape state action, the collision between sovereignty and universalist values, and the shifting articulation of governments, territories, and rights-bearing individuals.

See all the other Speaker Series Events here.

This series is sponsored by the Centre for the Study of Democratic Citizenship, which is funded by the Fonds de recherche du Québec – Société et culture (FRQSC).