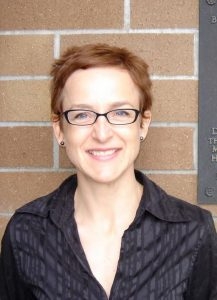 Nanopatterned surfaces are of central importance to a variety of areas and applications, such as computer chip architectures, tissue interfacing, biosensors, light management and plasmonics, among others. Typically, the various approaches to nanopatterning of surfaces, including silicon, are broken into two major classes: top-down methods such as photolithography, e-beam lithography and scanning force microscopy variants, and bottom-up synthetic techniques, including self-assembly. Since lithography is the single most expensive step in computer chip manufacturing, the use of self-assembled block copolymers (BCPs) templates on surfaces is being seriously considered by the semiconductor industry to pattern sub-20 nm features on a semiconductor surface; the Industry Technology Roadmap for Semiconductors (ITRS) terms this approach ‘directed self-assembly’, or DSA. Here, we will describe the remarkable versatility of using BCPs, polymers that contain sufficient chemical information to form highly ordered templates over large areas. Recently, the experimental observation of what are termed static distortion waves (SDWs) [also referred to as mass distortion waves (MDWs)] that are local chiral twisting of lattices, has become a topic of extreme interest in the area of 2D-based materials - perfect timing as the discovery of SDWs/MDWs in block copolymer-based self-assembled structures that are at least an order of magnitude larger in scale serve as an easily studied and tailored model for these motifs on 2D materials.

Jillian M. Buriak FRSC is a Canadian chemist, currently a Canada Research Chair in Nanomaterials at University of Alberta and a Fellow of the Royal Society of Canada, American Association for the Advancement of Science (AAAS) and Royal Society of Chemistry. She is known for her work developing flexible, lightweight solar cells made from nanoparticles. By spraying a plastic surface with nanomaterials, she's able to fabricate a transparent layer of electrode that acts as solar cells. Due to the flexibility, they could be incorporated onto different surfaces.

She has an A.B. degree from Harvard University (1990) and a Ph.D. from Université Louis Pasteur (1995), Strasbourg, working on organometallic chemistry and catalysis. She held a postdoctoral appointment at the Scripps Research Institute at La Jolla, California, working on self-assembly of nanostructures on surfaces. Buriak started her independent faculty career at Purdue University in 1997, was promoted to associate professor, with tenure, in 2001. In 2003, she joined the University of Alberta as a full professor.