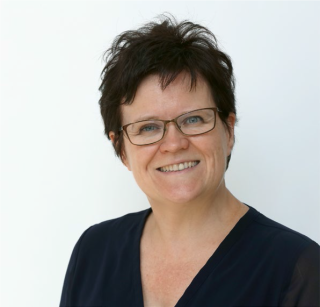 The use of N-heterocyclic carbenes to modify homogeneous metal catalysts is widespread since the high metal–NHC bond strength renders high oxidative and chemical stability to the resulting metal complexes. The use of NHCs to modify metal surfaces has received considerably less attention. We will describe the modification of planar metallic surfaces with NHCs. The nature of the surface overlayer is strongly dependent on the nature of the NHC. Similarly, NHCs are useful new ligands for the stabilization of metal clusters, with again the structure of the cluster being strongly influenced by the nature of the NHC. We will also present recent results on the use of NHCs as ligands for enantioselective cross coupling reactions of sulfones and other transformations of these interesting electrophiles.

Dr. Cathleen Crudden is the A.V. Douglas Distinguished Professor of Chemistry and Canada Research Chair (Tier 1) in metal organic chemistry at Queen’s University in Kingston, Ontario. She holds a Research Professorship at the Institute of Transformative Bio-Molecules (ITbM) in Nagoya, Japan, where she runs a satellite laboratory. She is a Fellow of the Royal Society of Canada, the Chemical Institute of Canada and the Royal Society of Chemistry (UK).

Dr. Crudden has made significant impact on diverse areas of science. She described one of the first cross-coupling reactions with chiral, enantiopure molecules and has demonstrated the strength and versatility of N-heterocyclic carbene ligands in materials science. This work was called "game changing", "elegant" and "the new gold standard" by experts in the field.

She has won numerous awards including the 2019 Cope Scholar award of the American Chemical Society, Montreal Medal (2019), Canadian Catalysis Society Award (2018), and the 2018 Carol Taylor award from the International Precious Metals Institute.

Crudden served as President of the Canadian Society for Chemistry and is currently Chair of the Chemical Institute of Canada. She is Director and CEO of the NFRF-T–funded Carbon to Metals Coatings Institute and is Editor-in-Chief for ACS Catalysis.