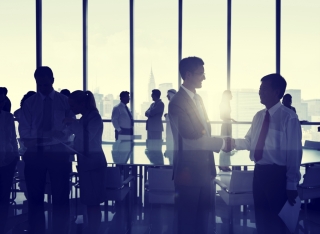 Word-of-mouth recruitment is the most common way to fill jobs, and management scholars have long thought that this practice contributes to job segregation by gender: women tend to reach out to other women in their networks, and men do likewise.

In fact, however, this form of recruitment can – and often does – contribute to gender desegregation, according to a study in the journal Organization Science by researchers at McGill University’s Desautels Faculty of Management and the MIT Sloan School of Management.

What’s more, employers can influence the process to ensure that it contributes to workforce diversity, rather than detracting from it, conclude professors Brian Rubineau of Desautels and Roberto Fernandez of MIT Sloan.

It’s not that people don’t tend to network with others like themselves. Previous research has shown this to be the case. But this, alone, doesn’t segregate. Men may refer mostly men and few women; but the few women who do get referred also tend to refer mostly women. What matters – and what has largely been overlooked – are differences in referral rates. Some groups may recruit more heavily than others. Those that do are likely to dominate over time.

Previous studies have shown, for example, that immigrant groups sometimes go from being small minorities in a workplace to big majorities because their members recruit more actively within their community networks. “If you have a group that is referring at a higher rate than other groups, then that group is – over time – going to become the majority, no matter how small it was to start with,” Rubineau says.

This gives organizations a potential tool for helping to achieve diversity goals, he adds. Most big employers track how people come into their organizations, so they have data on how many arrive as word-of-mouth applicants. “By also tracking the referral behaviour of their employees, organizations can get a better handle on whether their word-of-mouth recruitment is pushing the organization towards greater integration or greater segregation.” Some companies, for instance, encourage employees to recruit through social media channels such as LinkedIn, Facebook, Twitter or email – and have systems to track the referring behaviour, Rubineau notes. Gathering data from both referrers and job applicants makes it possible to monitor whether the process is helping the organization achieve its diversity goals.

In a future study, Rubineau plans to look at whether referral bonus policies can be used in this way to help organizations achieve their diversity goals.