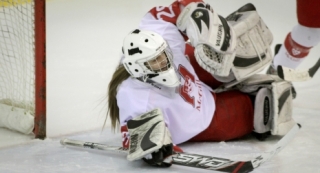 MONTREAL - Goaltender Andrea Weckman, a freshman from Kitchener, Ont., posted her second shutout in three career starts and McGill's high-scoring offence had goals from a pair of defencemen en route to a 3-0 home-ice whitewash over the No.10-Montreal Carabins in women's university hockey at McConnell Arena on Friday.

The top-ranked Martlets extended their CIS record win streak to 74 consecutive games and clinched first-place in the Quebec conference with a 14-0 record and four games remaining on the schedule.

The second-place Carabins, a new expansion team in the five-team Quebec conference, fell to 10-4-1 and now sit seven points back of McGill with only three contests left before playoffs.

"I'm fairly pleased with the way we played," said interim head coach Amey Doyle, who owns a 43-8-1 overall record when subbing for Peter Smith, who is on sabbatical with the Canadian Olympic team. "We had a good tempo in practice yesterday (Thursday) and the energy level was high today. The girls look forward to playing the Carabins."

An early first-period goal by Stacie Tardif, a sophomore blueliner from Ste. Anne de Bellevue, Que., held up as the game-winner. Senior forward Amy Soberano of Toronto and veteran rearguard Jasmine Sheehan of Mississauga, each added second-period markers for the Martlets, who outshot Montreal 45-17, including a lopsided 19-3 margin in the opening frame.

Weckman, who made 17 saves for the goose-egg, improved her unblemished record to 3-0. Former McGill netminder Catherine Herron, a native of Chambly, Que., and a niece of ex-Habs goalie Denis Herron, registered 42 saves in a losing cause and fell to 6-5.

It was a rare, hard-hitting affair for a women's contest that featured nine minor penalties -- including four roughing and/or body-checking calls -- issued by referee Melanie Bordeleau, who could've easily whistled another half-dozen similar infractions, if not more.

"It was very physical out there but we expected that tonight," said Doyle, who seemed to hint that there was some animousity between the two teams as the Carabins have two former McGill players in their line-up (sniper Marie-Andree Leclerc-Auger and goaltender Catherine Herron). "But if the ref wants to call it that way, it's fine with us. We have strong, good-sized players and can adapt very well to a physical style. It was spirited game and fun out there tonight."

The Carabins, who had already clinched second-place and home-ice advantage for the first-round of the conference playoffs, travel to cellar-dwelling Concordia (1-8-3) on Sunday. The Stingers trail fourth-place Carleton (4-8-0) by three points and are in danger of missing post-season play for the first time since the inaugural CIS women's hockey championship in 1998.

McGill, which swept all four encounters with the Carabins, will play their next two games on the road against Carleton, on Jan. 30 and Feb. 6.