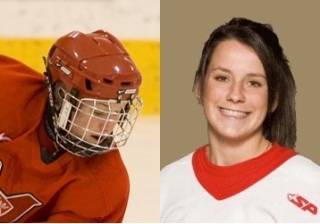 MONTREAL – Catherine Ward from Town of Mt. Royal, Que., is the McGill, Quebec and CIS university female athlete of the week for the period ending March 22, 2009.

It marks the 10th Quebec weekly conference selection of the season for McGill athletes.

Ward, a 5-foot-5 defenceman put forth a dominating performance and led the Martlets hockey team to their second consecutive national championship in Antigonish, N.S., where she was named CIS tournament MVP. The 22-year-old management junior, scored a goal and added two assists in three games.

In the tourney opening 2-1 overtime win over Manitoba last Thursday, she scored once and assisted on the overtime winner. A three-time all-Canadian who played for Canada at the under-22 world championships in Germany last January, she was recently named to the national senior team for the upcoming IIHF world championships in Finland, April 2-12. Ward, who is expected to graduate this spring, is the all-time top scoring blueliner in McGill history, with a 34-104-138 record in 109 career contests overall.