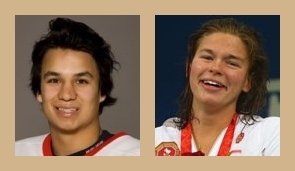 MONTREAL -- Francis Verreault-Paul, from the Innu community of Mashteuiatsh,Que., and Valérie Grand'Maison from Town of Mount Royal, Que., are the McGill University athletes of the week for the period ending Nov. 29, 2009.

Verreault-Paul, a 5-foot-10,178-pound right winger with the hockey Redmen, accounted for seven points, including a four-goal performance in McGill's 15-4 road victory at Ottawa last Tuesday. A 22-year-old science sophomore who is taking a double major in psychology and kinesiology, he tallied a natural hat-trick in the first period alone, at 6:01, 10:45 and 14:56 to put McGill ahead 4-1. His seven-point night was the most by a McGill player since October, 1996 when Pierre Gendron had eight. verreault-Paul attended College de Chicoutimi prior to joining the Redmen last fall.

Grand'Maison, a member of the Martlets swim team, swam an unofficial  world record time in the S13 division for the visually impaired at a Canada Cup Grand Prix meet in Etobicoke, Ont., last weekend. The 21-year-old psychology and history sophomore was clocked in nine minutes, 29.86 seconds in the women's 800-metre freestyle. It surpassed her own mark of 9:34.55 established at the 2008 German Open in Berlin but was not considered to be a new world record as the meet was not sanctionedby the International Paralympic Committee. She attended College Andre-Grasset prior to enrolling at McGill last January.