Verreault-Paul and Arndt named McGill athletes of the week 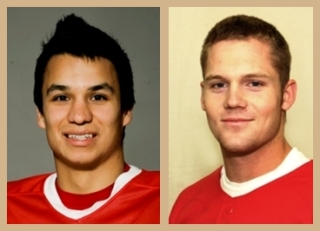 MONTREAL - Francis Verreault-Paul of Mashteuiatsh, Que., and Channing Arndt of Yarmouth, Maine, are the McGill University athletes of the week for the period ending Oct. 24, 2010.

Verreault-Paul, a 5-foot-10, 180-pound all-Canadian forward on the men's hockey team, scored nine goals, including a pair of game-winners, and added an assist in three games, all victories by the No.2-ranked Redmen, who swept UQTR, RMC and Queen's last week. The 23-year-old science junior is majoring in kinesiology and psychology. He tallied four times and set up another in a 7-1 win over Queen's last Saturday, which extended McGill's win streak to 11 straight games overall, a school record from the start of the season. Verreault-Paul, who joined the Redmen in 2008 after playing in the QMJHL with Lewiston and Chicoutimi, hails from an Innu community on the western shores of Lac St. Jean, Que. He is a graduate of College de Chicoutimi.

Arndt, a six-foot-one, 190-pound third baseman with the Redmen baseball team, was named tournament MVP as McGill captured the Canadian Intercollegiate Baseball Association national championship in Windsor, Ont., over the weekend. The 19-year-old political science sophomore led the tourney in both hits and RBIs. In six games over three days, he batted .571, going 12-for-21at the plate, with one walk, eight runs batted in, four runs scored and a pair of doubles. He enrolled at McGill in 2009 after graduating from Yarmouth high school.