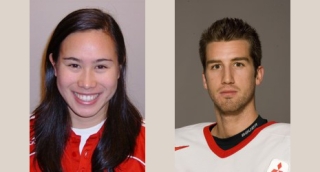 MONTREAL -- Kim Ton-That of Vaudreuil-Dorion, Que., and Simon Marcotte-Légaré of Longueuil, Que., are the McGill University athletes of the week for the period ending Oct. 11, 2009.

Ton-That, a 19-year-old management freshman, scored twice in her official CIS debut as the No.1-ranked Martlets blanked Concordia 5-0 in their CIS women's hockey season opener at McConnell Arena last Friday. It extended McGill's win streak to 55 consecutive games against CIS opponents. The 5-foot-3 centre, scored the game-winner on a power play late in the first period, then added an insurance marker on a penalty shot early in the middle period. Ton-That is a product of The Hotchkiss School in Lakeville, Conn.

Marcotte-Légaré, a 23-year-old management junior from Longueuil, Que., scored twice and added an assist as visiting McGill shocked the UQTR Patriotes 7-3 in men's university hockey at Trois-Rivières, on Oct. 7.  It was McGill's first-ever preseason road victory in 13 lifetime exhibition meetings at UQTR, since the teams began playing each other in 1969. The 6-foot-1, 190-pound centre, set-up a power-play goal at 14:33 of the middle period to make it 5-2 for the Redmen. He then scored three minutes later to put the game out of reach and added a third period marker as the icing on the cake. Marcotte-Légaré, an Academic All-Canadian last year, joined the Redmen in 2007 after graduating from College Edouard-Montpetit.