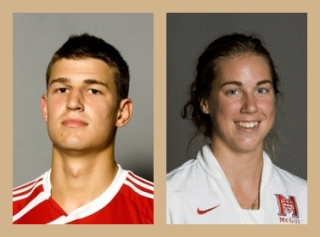 MONTREAL. - Graeme Tingey of North Vancouver, B.C., and Jennifer Thomson of Rosemere, Que., are the McGill University athletes of the week for the period ending Nov. 15, 2009.

Tingey, a 6-foot-2, 176-pound defender on the men's soccer team, scored three goals in three games, including two on post-overtime penalty kicks, helping the Redmen win silver at the CIS championship tournament in Langley, B.C. The 20-year-old finance junior netted McGill's second marker in their 10-9 PK quarterfinal victory over McMaster last Thursday. He repeated that feat and was named player of the game in a 5-4 PK semifinal conquest over Trinity Western on Friday and then tallied the opening goal in Sunday's 3-2 loss to Laval in the gold medal match. Tingey is a product of Windsor Secondary school in Vancouver.

Thomson, a 5-foot-7 power-hitter on the women's volleyball team, racked up 30 kills and 28 digs in a pair of regular season matches last weekend, a 3-0 win at Sherbrooke and a 3-2 loss at Laval. The 23-year-old master's student in physical education had a game-high17 kills and 15 digs in the victory at Sherbrooke, which marked the team's second-ever sweep on the road against the Vert & Or. Thomson, a three-time all-Canadian, starred at John Abbott College before enrolling at McGill in 2005.