The Reporter - Graffiti: urban nuisance or work of art? 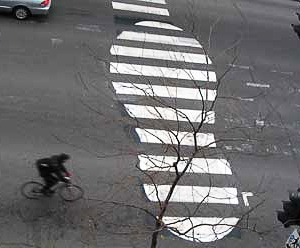 Pascal Zamprelli in the McGill Reporter.

Recently, Telus and MuchMusic had what they thought was a brilliant idea: a joint advertising campaign whereby they would sell photographs of downtown Toronto graffiti as wallpaper images for cell phones. They were a hit, and the plan was deemed a success.

Until, that is, Telus got a call from someone representing the creators of all those urban artworks, many of which had actually been commissioned as part of a festival. The company had simply not considered the notion of copyright issues applying to graffiti in the streets. This, they admitted, was a big mistake, and they immediately provided compensation.

To what intellectual property rights do works of graffiti give rise? This was the central question debated last week at Art in the Streets: Graffiti’s Challenge to Intellectual Property, a panel discussion organized by the student club Rethinking Intellectual Property Policy (RIPP) at McGill’s Faculty
of Law...