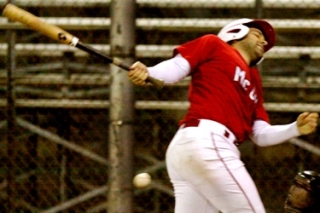 MONTREAL - Chris Ames of Fredericton and Casey Auerbach of Westmount, Que., drew back-to-back walks with the bases loaded in the bottom of the sixth inning to snap a 4-4 tie and give McGill a 6-4 victory over Concordia in men's university baseball before a near capacity crowd of 350 at Pierre Elliott Trudeau Park in Cote St. Luc, Wednesday.

It marked the third consecutive victory for the Redmen, who improved to 3-4 in the CIBA North Division.

Concordia actually outhit the Redmen 8-5 but committed two errors and walked nine batters, which ultimately, led to their demise.

Ames, a freshman left-fielder, went 1-for-3 at the plate with a pair of RBIs from the No.2 spot in the batting order.  Auerbach, a senior third baseman, was 0-for-1 with a pair of walks, one sacrifice fly and two RBIs.

Elliott Ariganello of Etobicoke, Ont., picked up the win in relief of starter L.J. Aguinaga, a native of Dollard des Ormeaux, Que., who left after five innings with the score knotted at 4-4. Ariganello, who allowed just one hit in his inning of work, walked two batters but struck out the side.

Daniel Porter, a sophomore from Coaticook, Que., pitched the final inning and picked up the save, allowing only one base-runner on a walk.

McGill heads for the nation's capital this weekend, with respective back-to-back doubleheaders at Carleton and Ottawa, Sept. 24-25.