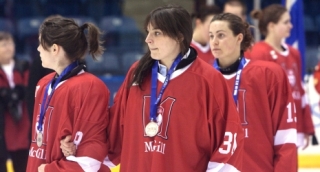 "They came out really hard and pressured us and we haven't seen that style all year so it took us a bit of time to adapt," said Amey Doyle, interim head coach of the Martlets. "We needed to get more pucks to the net and challenge the goalie more than we did. Full marks to Alberta. They were better than us today and earned the title."

McGill's power-play, which had been second-best in the nation at 27.6 per cent during the regular season, went 0-for-6 against Alberta and 2-for-20 in the tourney.

"I feel a great sense of relief," said Pandas head coach Howie Draper. "It's been a tough road for this team but we came together at exactly the right time and it's a great feeling."

Melody Howard of Grand Prairie, Alta., scored the game-winner, unassisted, at 6:09 of the first period, slamming home her own rebound past netminder Taylor Salisbury, a freshman from Surrey, B.C., who was saddled with her first loss in seven post-season games.

Edmonton native Alana Cabana added an insurance marker at 18:49 of the middle stanza. She pounced on a rebound off the goal-post to beat a diving Salisbury, who had lost her stick on the play.

The Pandas outshot McGill 24-18 and were backstopped by stellar goaltending throughout the championship as senior goaltender Dana Vinge of Edmonton did not allow a goal against in three tournament games, tying the CIS tourney shutout record set by McGill's Charline Labonté in 2008.

"It is an awesome reward for all the hard work our team put forth this year," said Vinge. "I feel like I didn't have to do much because my teammates played amazing defence, blocking shots and everything and I just did what I had to do."

McGill, the two-time defending CIS champions, kept pecking away as the game wore on and almost scored on a goal-mouth scramble with just over five minutes remaining. Their momentum was halted when third-year blueliner Cathy Chartrand, the Quebec league's player of the year, was called for body-checking at 15:47. Following the penalty, time simply ran out on the Martlets.

MARTLET MURMURS: Chartrand was the only member of the Martlets to earn all-tourney honours and did so for the third straight year... Three seniors on the Martlets have played their last game in a McGill jersey: team captain Vanessa Davidson of Kirkland, Que., alternate captain Rebecca Martindale of Kingston, Ont., and forward Amy Soberano of Toronto... Also,  injured  goaltender Gabrielle Smith, a music senior from Ottawa, may not be back depending on where she chooses to complete a master's degree... Davidson graduates as McGill's all-time leader in games played (203), goals (145), assists (158) and points (303)... Martindale posted totals of 59-59-118 in 194 contests... Soberano, a defensive forward, had a 25-33-58 in 162 games overall... Throughout the game, McGill had a loud, unique cheering section, dressed in the blue colours of the upstart Montreal Carabins, an expansion team in the Quebec conference who have quickly become the second-best team in the province... It is assumed that the the Carabins were pulling for McGill to prevail because the CIS championship team also wins an extra wild-card berth for their conference to compete at the Nationals the following year.

SHOTS ON GOAL (by period)

BLACKBERRY PLAYERS OF THE GAME: