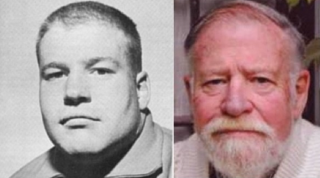 By Earl Zukerman
Published by McGill Athletics, May 11, 2015

MONTREAL – A funeral service will be held on Tuesday (May 19, 1 p.m.) at the Mount Royal funeral home for Ray Baillie, who played nine seasons in the Canadian Football League and later coached with the McGill Redmen. He died in hospital on May 10, two days after suffering a fall in his house in the Town of Mt. Royal. He was 80.

Baillie later coached football, leading the Ville-Émard Rams to the 1958 juvenile championship, and later coached the Chomedey Chiefs, who won the senior high school championship in 1970. He then joined his twin brother Charlie on the coaching staff of the McGill Redmen, where Charlie lasted 29 years as bench boss (culminating with his inducted to the McGill Sports Hall of Fame). Ray served as defensive coordinator at McGill from 1972 to 1978, including the 1973 season when the Redmen won the Quebec championship and advanced to the Vanier Cup national final.

"Ray was a very thoughtful coach who taught his players much more than how to play football," said Vic Pywowarczuk, who quarterbacked the Redmen in the late 1970s. "He is a large part of the history of McGill football.  He will be missed."

His primary career was as a teacher in which he was a great inspiration to, and greatly respected by his many colleagues and students over a span of nearly 40 years, most notably at Chomedey Polyvalent high school in Laval, where he taught history and established a history resource archive centre and the debating club. He also taught at McGill's faculty of education.

After his retirement in 1994, he embarked on a 10-year project with his wife Diana, travelling throughout Quebec gathering information and photographing for a trilogy of books entitled Imprints: Discovering The Historic Face of English Quebec. In 2010, he published a fourth book, Scottish Imprints in Quebec.

He is survived by his wife Diana (nee Palmer), his children, Patrick (Tasha), Megan (Mike), and Nick (Larissa) and his brother Charlie (Alyce). He is predeceased by his brothers Dave and Tom.

The family will be receiving condolences just prior to the  funeral service at the Mount Royal Cemetary (1297 Chemin de la Forêt, Outremont, Que.), beginning at 12 noon followed by a memorial service at 1 p.m. In lieu of flowers, donations may be made in his name to the charity of your choice.

Condolences may be submitted online here.

Many publications have written stories about the passing of Ray Baillie: