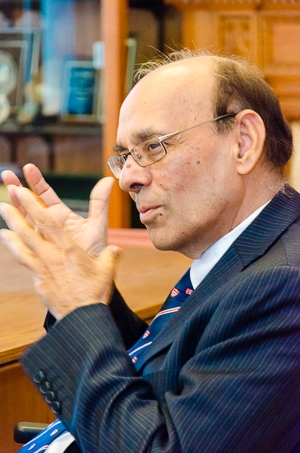 The Faculty of Law is pleased to announce that Professor Ram Jakhu has been appointed Director of the Research Center and the Institute of Air and Space Law (IASL), for a one-year term that will begin on June 1, 2016, when the outgoing director, Professor Paul S. Dempsey, will be stepping down.

“Our colleagues Paul Dempsey and Ram Jakhu have carried the IASL to new heights, in a competitive environment in which we have seen other Air and Space Law centers and institutes emerge elsewhere in Europe and America. Through their hard work, the IASL now works closely with international organizations, including the United Nations, on a broad range of public policy, research and educational initiatives addressing the regulatory regime of aviation, and an optimal governance regime for outer space,” said Dean Daniel Jutras. “And we know how vibrant and loyal the IASL alumni community is, increasing the Institute’s visibility around the world.”

“The directorship of the IASL is an honor that I accept gladly and a responsibility that I undertake wholeheartedly. We will be celebrating the IASL’s 65th anniversary with international conferences, and other initiatives at McGill and abroad,” said Professor Jakhu , adding that “one year may be short, but I believe it is long enough for me to pave a smooth path for the next Director to move the Institute forward.”

The Faculty of Law is very grateful for Professor Paul Dempsey’s many years of leadership and many accomplishments as Director of the IASL, and to Professor Ram Jakhu for taking up this new challenge at a critical moment in the life of the Institute.