Peroff swoops Ravens off perch as Martlets stretch streak to 61 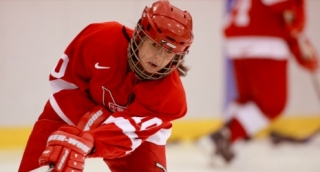 On a soirée that featured the ceremonial raising of last spring's CIS championship pennant to the rafters of McConnell Arena, the Martlets showed why they are still the No.1-ranked team in the nation and extended their win streak to 61 consecutive games against CIS opponents since losing 2-1 in an overtime shootout at Alberta on Dec. 30, 2007.

McGill has now won 34 straight contests over the Ravens and are 46-0-1 lifetime against them.

Rearguard Victoria Germuska of Kanata, Ont., gave Carleton a 1-0 lead on a power play midway through the opening period but Ann-Sophie Bettez of Sept-Iles, Que., notched her sixth goal of the campaign to knot the score at 8:15 of the middle frame. Tara O'Reilly, the Ravens' captain from Varna, Ont., restored the one-goal margin with 2:36 remaining before intermission.

In the final period, freshman Kim Ton-That of Vaudreuil-Dorion, Que., connected on a power play goal at 2:49 to even the count at 2-2. As overtime loomed in the dying moments, junior Jordanna Peroff of Keswick, Ont., swooped to the rescue with the game-winning tally at 17:57. Vicky Wells, a native of Oshawa, Ont., added an empty-netter at 19:07 to ice the contest.

The game wasn't as close as the scoreboard might indicate as McGill held a lopsided 33-15 edge in shots on net. Rookie netminder Taylor Salisbury of Surrey, B.C., picked up her third victory in as many starts, filling in for senior Gabrielle Smith, who was hospitalized Saturday after a freak traffic mishap. Smith, a fifth-year music major, was struck by a truck while riding her bicycle to a team practice. She did not suffer any life-threatening injuries but required surgery to repair torn muscles in her legs.

The Martlets, who improved to 7-0 against CIS opponents, will now put their win streak on the line when they head east for a three-game non-conference tour of Atlantic conference teams in the Maritimes next week. They will take on St. Francis Xavier (Nov. 20) in Antigonish, N.S., before heading to Halifax for games at Saint Mary's (Nov. 21) and Dalhousie (Nov. 22). McGill has posted a 6-0 record against AUS teams during the streak.

MARTLET MURMURS: On hand for the banner-raising ceremony was All-Canadian goaltender Charline Labonte and head coach Peter Smith, both on sabbatical from McGill to serve with the Canadian Olympic team... They have been based in Calgary since August and had a break in their schedule... All-Canadian rearguard Catherine Ward, who graduated last spring after only three years, is also with the national team but was unable to attend to ceremonies as she had pre-planned a brief vacation in a sunny climate.... The team also had a ring ceremony at McConnell Arena on Thursday night... Members of last year's squad received their CIS championship rings, which featured a "Back-2-Back" inscription and a 25-0 notation in recognition of their undefeated regular season and playoff record.