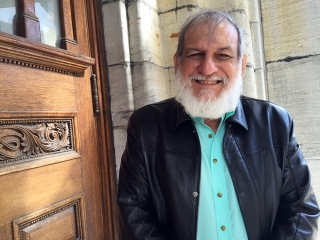 Neuroinformatics stands at the intersection of neuroscience and information science. One of the world leaders in this discipline is Prof. Pedro Valdes-Sosa, General Vice-Director for Research of the Cuban Neuroscience Center (CNEURO) which he co-founded in 1990.

Since 2013 Prof. Valdes has held the postion of Distinguished Professor of Neuroinformatics at the University of Electronic Science and Technology of China. In 2015 he was awarded the “1000 talent foreign professorhip” of China, and was designated as the Director of the Joint China-Cuba Laboratory for Frontier Research in Translational Neurotechnology. He is a senior professor of the Higher Institute for Medical Sciences, full member of the Cuban Academy of Sciences, full member of the Latin American Academy of Sciences and ex officio Program Chair of the Organization for Human Brain Mapping. Recently, Prof. Valdes was in Montreal to visit his collaborators here at McGill and its Montreal Neurological Institute to deliver a series of lectures and advance research collaborations in neuroscience.