Oles well that ends well as Martlets cruise to victory; Win streak at 96 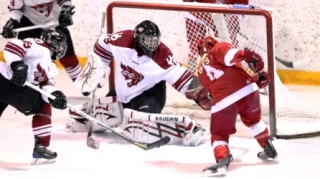 (LESLIE OLES SCORING ONE OF HER THREE GOALS. PHOTO BY DEREK DRUMMOND)

OTTAWA - Rookie Leslie Oles of Beaconsfield, Que., netted a hat-trick and added an assist as No.1-ranked McGill skated to a convincing 4-1 victory over the Ottawa Gee-Gees in CIS women's hockey at the uOttawa Sports Complex, Sunday.

It marked McGill's 96th consecutive win over a Quebec University Hockey League opponent and was also the team's 30th consecutive victory over the Gee-Gees, who were the last QUHL team to defeat the Martlets when they registered a 2-1 decision in Ottawa on Feb. 7, 2007.

Oles, a 5-foot-2 forward, opened the scoring only 42 seconds after the inaugural faceoff. Erika Pouliot evened the score at 14:39 but after that is was all Oles, all the time. The 20-year-old physical education freshman put McGill ahead 2-1 with what proved to be the game-winner at 3:55 of the middle period. Less than nine minutes later, she connected on the power-play with her seventh marker of the season to complete the hat-trick. Oles then capped off her career-best performance by setting up rookie Katia Clement-Heydra's goal at 19:32 of the second period. There was no scoring in the final frame.

"Oles was simply great out there and the puck finally started bouncing her way," said McGill head coach Peter Smith. "She could've easily had five or six goals with the scoring chances she created."

McGill had a 36-10 edge in shots, including a lopsided 17-3 margin in the second period.

Goaltender Charline Labonte of Boisbriand, Que., made nine saves for the win, improving her record to 12-0 on the campaign and 61-1-0 lifetime in regular-season play. The Olympic gold medalist leads all CIS goaltenders in both goals-against average (0.68) and save percentage (.956).

All-Canadian defenceman Cathy Chartrand of Lac Nominingue, Que., assisted on the last three McGill markers. The 5-foot-10 senior continues to lead all CIS rearguards in points and now sits second in the conference scoring race with a 6-15-21 record in 15 games, one point behind forward Kim Deschenes of the Montreal Carabins.

Ottawa were unable to contain the speedy Martlets and took the first eight penalties of the game. A measure of discipline, McGill was penalized only twice with both coming in the final five minutes of the game.

"We worked hard and kept our feet moving," said Smith. "Whenever you mix that in with good discipline, then good things happen.'

Fourth-place Ottawa (6-9-1) plays host to Concordia (6-6-2) next Saturday. McGill (15-0) will host the Montreal Stars of the Canadian Women's Hockey League in an exhibition tilt on Feb. 4, before attempting to extend their win streak to 97 against Carleton on Feb.5. Both games are slated for 7 p.m. starts at McConnell Arena.

MARTLET MURMURS: McGill is now 44-2-1 lifetime against the Gee-Gees... The Martlets were without the services of forward Ann-Sophie Bettez and Carly Hill for the second straight game as both are playing with a CIS all-star team at the FISU World University Winter Games in Turkey. Bettez, from Sept-Iles, Que., tallied twice on Sunday as Canada hammered Great Britain 14-0 and improved to 3-0 in the pool play. With two games remaining in the preliminary round, Canada is the only undefeated team in the six-country field and has a one-point lead over Finland (2-0-1) in the standings. The top four teams advance to the semifinals. Canada wraps up round-robin play with duels against the United States (1-2) Monday at 11 a.m. local time (4 a.m. ET) and Turkey (0-2) Wednesday at 8 p.m. local (1 p.m. ET).