Three McGill researchers among the recipients of NSERC national prizes 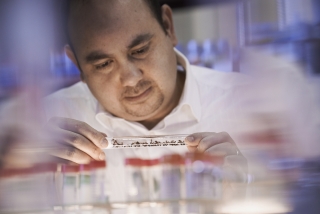 Two McGill researchers—Prof. Ehab Abouheif, of the Department of Biology, and Prof. Aashish Clerk, Department of Physics—have been named as 2014 recipients of E.W.R Steacie Memorial Fellowships, awarded by the Natural Sciences and Engineering Research Council of Canada’s (NSERC). In addition, doctoral candidate Michael Lifshitz, working in the cognitive neuroscience lab of Prof. Amir Raz, has won NSERC’s 2013 André Hamer Postgraduate Prize. All three prizes will be presented to the researchers at a special ceremony today at the Governor General of Canada’s residence, Rideau Hall, in Ottawa.

“McGill is extremely proud of Dr. Abouheif’s and Dr. Clerk’s creativity and leadership in research and education in the biological sciences, and the physics of engineered quantum systems, which NSERC has acknowledged with these prestigious fellowships,” said Dr. Rose Goldstein, Vice-Principal (Research and International Relations) at McGill. “I also extend my congratulations to the winner of the André Hamer Postgraduate Prize, the up-and-coming innovator Michael Lifshitz.”

About Prof. Ehab Abouheif’s work
Dr. Ehab Abouheif’s breakthrough discoveries are facilitated by fusing the fields of ecology, evolution and developmental biology (called “eco-evo-devo”) to uncover the rules that underlie the interactions between an organism’s genes and its environment. Dr. Ehab Abouheif has revealed that dormant ancestral genes exist in all animals, and that it is possible to revive these genes with the right triggers. He is applying his research to understand environmental factors that can trigger a genetic trait that causes cancer.

About Dr. Aashish Clerk’s work
Quantum mechanics has radically changed the way we view the physical world, leading to revolutionary technologies including transistors, lasers and magnetic resonance imaging. Dr. Aashish Clerk has developed new theories demonstrating how to harness the quantum interaction between photons and mechanical motion in engineered systems. He is widely considered to be one of the world’s most prominent young theorists focusing on the physics of engineered quantum systems.

About Michael Lifshitz’s work
Michael Lifshitz, a doctoral candidate in neuroscience, and winner of a Vanier Canada Scholarship, is working with Dr. Amir Raz, Canada Research Chair in the Cognitive Neuroscience of Attention, to prove how mental training can improve behaviour. His research uses non-invasive brain imaging to show how mental training strengthens brain networks, resulting in improved cognitive, emotional and social aptitude.

The NSERC Steacie Fellowships honour the memory of Dr. Edgar William Richard Steacie, an outstanding chemist and research leader who made significant contributions to the development of science in Canada during, and immediately following, World War II. Dr. Steacie believed young researchers are great national assets and should be given every opportunity to develop their own ideas. Every year, NSERC awards up to six Steacie Fellowships that are held for a two-year period, which include a research grant of $250,000 and normally also includes a contribution of $90,000 per year to the university toward the fellow's salary.

The NSERC André Hamer Postgraduate Prizes are awarded to the most outstanding candidates in NSERC's master's and doctoral scholarship competitions. Valued at $10,000 each, the prizes were established by Arthur McDonald, winner of the 2003 Gerhard Herzberg Canada Gold Medal for Science and Engineering, in memory of a very promising young scientist who passed away in 2003.

For information about NSERC: http://www.nserc-crsng.gc.ca/Media-Media/NewsReleases-CommuniquesDePresse_eng.asp